Vehmgericht (by Marx, avant la lettre) on the nihilism of decay 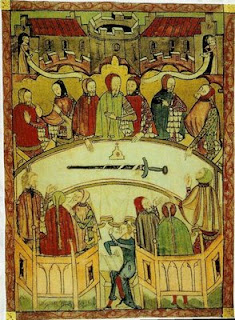 On the one hand, there have started into life industrial and scientific forces, which no epoch of the former human history had ever suspected. On the other hand, there exist symptoms of decay, far surpassing the horrors recorded of the latter times of the Roman Empire. In our days, everything seems pregnant with its contrary: Machinery, gifted with the wonderful power of shortening and fructifying human labour, we behold starving and overworking it; The newfangled sources of wealth, by some strange weird spell, are turned into sources of want; The victories of art seem bought by the loss of character.
At the same pace that mankind masters nature, man seems to become enslaved to other men or to his own infamy. Even the pure light of science seems unable to shine but on the dark background of ignorance. All our invention and progress seem to result in endowing material forces with intellectual life, and in stultifying human life into a material force.
This antagonism between modern industry and science on the one hand, modern misery and dissolution on the other hand; this antagonism between the productive powers and the social relations of our epoch is a fact, palpable, overwhelming, and not to be controverted.
Marx, Speech at the Anniversary of the People's Paper (1856)
Posted by Benjamin at 02:55