I'm no Flaubert, you'll be suprised to hear, but at various points I have toyed with the idea of writing a contemporary version of his 'Dictionary of Received Ideas'. I actually see there is a facebook group dedicated to this, but they don't seem to have got very far. I can't achieve Flaubert's devastating wit and ability to capture the true banality, but out of semi-annoyance I can't resist a couple of attempts.
Academics, never live in the 'real world', don't understand business
Activist, never an academic, involved in the real world
Art, neither autonomous nor propoganda. Always problematising, questioning, making one think. Provocative, but never be so vulgar as to be actually shocked.
Blogs, destroying our culture or giving birth to a new public sphere. When meeting a blog writer always express suprise they find time to write it, never visit.
Deconstruction, passe, but express admiration for Derrida
Difference, see Same
Fundamentalism, condemn in all forms
Lenin, misunderstood, admire tentatively
Marxism, always teleological, stagist, and reductivist. Express appreciation for the thought of Marx, but with the proviso it won't quite do today.
The Novel, 'Dead', or 'In better health than ever (thanks to Coetzee)'
Novels, always be writing one.
Rhizome, better than trees, see Tree
Same, see Difference
Sex, now liberated
Temporary Autonomous Space, live in one
Tree, worse than rhizomes, see Rhizome
Zizek, too popular, really a Stalinist, but always provocative
Posted by Benjamin at 03:35 No comments: 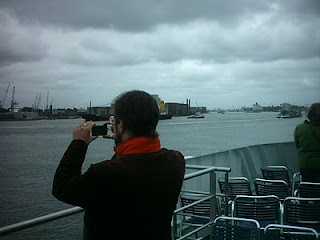 Images from Alberto of our tour of Rotterdam harbour on an icy Sunday in June... This is part of a new website for Alberto and Jeff Kinkle's forthcoming zero book Cartographies of the Absolute (thanks to Nina). Mine are on Facebook here.
Posted by Benjamin at 01:41 1 comment:

The perfect description of Evan's project, detourned from Adorno on Bloch:

'Like all thought worthy of the name, Evan's thrives on the edge of failure, in close proximity to sympathy for the occult.'
Posted by Benjamin at 05:12 No comments:

We come from the land of ice and snow

Evan, suggestive and perplexing on that neatly insane Nazi-adopted cosmogony of 'world ice theory'. This reminded me of Roger Callois's rather dubious 30s essay 'The Winter Wind', on which Benjamin commented:
His contribution, 'The Winter Wind', celebrates the "bitter wind," under whose frosty breath all the weak must die, and in which the fit will recognize each other by their red cheeks (not from shame) in order to unite in a caste of heroes ....
and this of course:


It's interesting to analyse, as this post does, the radicalised nihilism of such fascist/Nazi 'theories', or pseudo-theories, not least for the questions they raise about the attractions of nihilism more generally and question of active/passive/completed nihilism. In what forms do such nihilisms seem to allow/accept ther very hierarchisations and distinctions they (should) problematise? What questions does this raise for the contemporary valorisation of nihilism? Is a cosmogenic 'absolute nihilism', thinking here of Thomas Ligotti, an exit from such attractions or does it reproduce an elitism of the confrontation with meaninglessness?

In the wake of the move of CRMEP to Kingston the ironies keep on coming:

"Around 4/5th of Middlesex University’s research in RAE2008 was rated as of international standing. An important aspect of our strategy to build on this success is to strengthen our research student base. Consequently, we are funding several fully funded research studentships for an October 2010 start. Applications from suitably qualified candidates are invited in the following areas."
My personal feeling, reinforced by someone more sensible than I, is that under the conditions of the rigged game this was a victory. The rigidity of the academic job market, which once was a trade off with job security, now works to undermine academics. The obvious point was that Middlesex regarded their staff as disposable and now they have 'disposed' themselves en masse. Of course I feel real concern for those left behind, more than most as I feel strongly the need for struggles to increase job security. I'm deeply critical and sceptical about those 'radical' demands to exit philosophy from the university - living outside the university is living in other forms of wage labour, and I see nothing wrong with demanding state support for education (pending abolition of the state / value form / etc...).
The fantasy of the private university or certain forms of knowledge common seems to me to rest on a further entrepreneurialisation of knowledge. Here is where a thinking of the state and capital is required, rather than recycling anti-social democracy tropes in the guise of exodus style radicalism. 'Abolish the university', well wait around it's already being done by neo-liberal capitalism (isn't there a story that Jacques-Alain and Judith Miller where moved out of one Paris university by the French state (to another, but in the provinces!) in their haut Maoist destroy the university phase).
Posted by Benjamin at 01:23 2 comments: