Dying on our feet

Evan on disease as class struggle. Not so much 'They want to kill us, but we're already dead', as 'We're already dead, and we want to kill them'; the cold embrace of class hatred, Samson Agonistes - revolution as nihilism; bring it all down...
Posted by Benjamin at 03:41 1 comment: 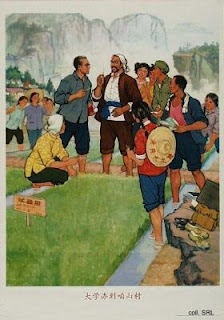 The Browne report sees a nice return to 'Thatcherism in its Maoist phase', but this time the re-education of the intellectuals will take place without any manual labour to do either. Of course no exceptions made for cadre from 'lower levels' either, let them go first as they know the way.
Posted by Benjamin at 09:38 No comments:

Carl's on the 1970s, to which I hope to be contributing sometime in the next couple of weeks, and Evan's on British horror, obviously 'Carl' and 'Evan' are mere signifiers for assemblages of social negativity...
Posted by Benjamin at 02:55 No comments:

Dependants Hired by the State

This is Rakesh Bhandari on the pioneering work of Jairus Banaji on waged labour, and seems to speak to the Browne review and the incipient privatisation of my own job: from hired dependant to confronting the despotism of capital (although the 'social factory' provides its own series of contexts for that despotism in forms of consumption). Perhaps this social position accounts for some of the modelling of capitalism as exteriority by such hired dependants? It might also account for the accelerationist faith in capital as the desire for subsumption ('in the destructive element immerse', to quote Conrad (fuller quote below). I've highlighted the last line as the resistance to this move - privatisation is sharpening contradictions on their terms.

Capital, for its part, fights to eliminate labour paid out of revenue to the extent that such activities interfere with capital using such opportunities for the valorisation of capital. It does this, for example, by closing down a public hospital or school paid for out of tax revenue or a public utility so that a capitalist can take its business. Of course, some of the workers paid out of expended revenue may also carry out operations that speed up (and may in fact be necessary for) the rotation of capital (for instance, building and repairing a public roads system out of tax money), but these activities are not themselves aimed at profit and thus the workers do not come under the terroristic discipline of profit as do workers in the banking and commerce sectors. Whenever they can, capitalists strive to replace dependents hired by the state with wage-labourers exploited by capital. Hence the mania for privatisation which has been a hallmark of capitalist development for the last twenty-five years, and has been more important for the growth of the capitalist system, through the vent provided for surplus-capital, than the reduction of the putative deductions from surplus-value by the commercial and banking capitalists in the bourgeois fraternity. Writing in 2006, Andrew Glyn underlined that privatisation has ‘reduced the contribution of government owned companies from 12% of UK GDP in 1979 to less than 2% today’. It goes without saying that the working class, composed of wage-labourers and hired dependents alike, should resist privatisation. The analytical distinction, in other words, is in the first place not a political distinction.
(From Historical Materialism 16 (2008): 71-99).

"'Yes! Very funny this terrible thing is. A man that is born falls into a dream like a man who falls into the sea. If he tries to climb out into the air as inexperienced people endeavour to do, he drowns - nicht wahr?... No! I tell you! The way is to the destructive element submit yourself, and with the exertions of your hands and feet in the water make the deep, deep sea keep you up. So if you ask me - how to be?' "His voice leaped up extraordinarily strong, as though away there in the dusk he had been inspired by some whisper of knowledge. 'I will tell you! For that, too, there is only one way.'
'And yet it is true it is true. In the destructive element immerse.'... He spoke in a subdued tone, without looking at me, one hand on each side of his face. 'That was the way. To follow the dream, and again to follow the dream- and so - ewig - usque ad finem....'
Posted by Benjamin at 03:55 2 comments: 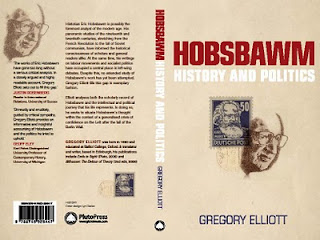 New Gregory Elliott book from Pluto, at a good price as well, always worth reading GE.

Posted by Benjamin at 04:29 No comments:

This seminar is running at Duke on 'speculative aesthetics', and usefully has some of the text available should you wish to engage from afar. I'd quite like to have been included in the reading for accelerationism... oh well
Also, bearing in mind the weather, I'm tempted to attend this 'drifting seminar' in Brighton, organised by the publishers of our communization collection, Minor Compositions. Again reading available. Hopefully more politically attuned than my last 'psychogeographic' outing in Brighton, to see Iain Sinclair and Aidan Dun (who was publicising Vale Royal, so that must make it 1992?) years ago, when the 'discussion' descended into recriminations of a King Cross squat and off-key remarks about the 'spiritual desolation' of the estates (like Moulsecomb) that surround Brighton - psychogeographic snobbery.
Posted by Benjamin at 03:28 No comments:

That which is communist is not “violence” in itself, nor “distribution” of the shit that we inherit from class society, nor “collectivisation” of surplus-value sucking machines: it is the nature of the movement which connects these actions, underlies them, renders them the moments of a process which can only communise ever further, or be crushed.
Theorie Communiste
In lieu of anything useful, another quote from TC on the nature of communisation and a minor reflection, that I'd somehow like to work into my HM paper, on the usual adoption of the negative value of excrement. Thinking of Brecht's 'bad new', Freud's equation of money and excrement, and Bataille's reversal with his (non-)concept of heterology, perhaps we might re-think a 'cloacal critique', although with an awareness that metaphoric reversals of valence seem pretty cheap when, as Mike Davis points out, so much of humanity does live in excrement (and has done). Perhaps there would be someway to connect to Owen's Socialist Lavatory League, and the inadvertently apocalyptic visions in the CiF posters' revelations of apocalyptic waste burning in suburban Britain? Or, of course, and as mentioned by Owen, Evan's salvage punk re-tooling of debris. After all, to return to Marx's point that history advances by the bad side and Olson's Kingfishers, 'on some rejectamenta' is where change takes place.
Posted by Benjamin at 07:56 No comments:

completed his doctorate in 1841

For some reason I find the Verso author's description for Marx inexplicably amusing, and where's the author's photo? Shabby promotion Marx.
Karl Marx studied law and philosophy at the universities of Bonn and Berlin, completing his doctorate in 1841. Expelled from Prussia in 1844, he took up residence first in Paris and then in London where, in 1867, he published his magnum opus Capital. A co- founder of the International Workingmen’s Association in 1864, Marx died in London in 1883.
Posted by Benjamin at 05:17 1 comment: