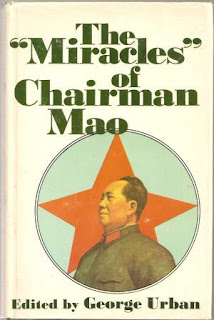 Found here; I think they are 'Mao sceptics'

“At 15:40 Chou Te-ming was carried into the emergency room of the Hsin-hua Hospital. His heart had stopped beating 18 minutes before he got there. “The doctor on duty felt it his responsibility to save this worker, but he recalled that according to a foreign medical journal, it was impossible for a patient to revive after the heart had stopped beating for six minutes. Could he save this worker after a much longer time?
“Raising his head, he saw members of the workers and P.L.A. Mao Tse-tung’s thought propaganda teams at his side. Their advice when they came to the hospital rang in his ears: ‘You must follow Chairman Mao Tse-tung’s teaching, join the side of the workers, peasants and soldiers, and serve them whole-heartedly!’ He must try to save Chou Te ming!…
“At that critical moment, the propaganda team read out quotations from Chairman Mao, urging them to “Surmount every difficulty to win victory.”
“After a brief consultation, the medical workers decided to give the patient an injection of adrenalin, breaking with the foreign bourgeois conventions and old medical ‘text books’ which rule out adrenalin in cases of electric shock because it causes strong contractions of the heart which may go into uncontrollable fluttering and result in death….
During that time, members of the propaganda team followed Chairman Mao’s teaching: ‘The revolutionary war is a war of the masses; it can be waged only by mobilizing the masses and relying on them.’ They asked other doctors and nurses to take part. With the joint efforts of the masses who were thus fully mobilized, Chou Te-ming began to take a turn for the better.
“Chou Te-ming finally regained consciousness after 63 hours. 75 hours after his accident, he opened his eyes and clearly saw the portrait of our great leader Chairman Mao in his ward. His first words were: ‘Long live Chairman Mao! A long, long life to him!’”
Posted by Benjamin at 02:32

Thanks James for that, the Institute also posted me that link - disturbing.