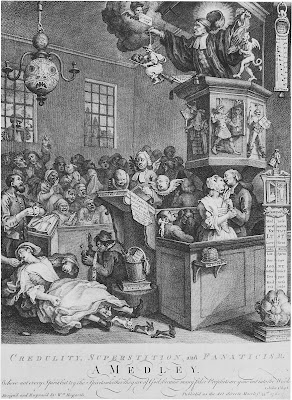 A debility and dimness of the imaginative power, and a consequent necessity of reliance on the impressions of the senses, do, we well know, render the mind liable to superstition and fanaticism. Having a deficient portion of internal and proper warmth, minds of this class seek in the crowd circum fana for a warmth in common, which they do not possess singly. Cold and phlegmatic in their own nature, like damp hay, they heat and inflame by co-acervation; or like bees they become restless and irritable through the increased temperature of collected multitudes. Hence the German word for fanaticism (such at least was its original import) is derived from the swarming of bees, namely, Schwärmen, Schwärmerey.
Coleridge
Posted by Benjamin at 05:18