Critique is, today, not in good favour. On the one side, we have the neo-Nietzschean and neo-Spinozan currents of ‘high’ theory, which regard critique as fatally limited by being bound to what it negates and hence unable to accede to a true creation that would exceed and disrupt the mechanisms of capital and the State. Despite differences and conflict – the so-called ‘theory wars’ – there is surprising common agreement that critique is fundamentally passé, to be replaced by an emphasis on the excessive, the evental, and the ecstatic (parsed in very different forms). In the place of critique stands the affirmation of uncontrollable and unlimited powers. On the other side, we have the historicist and culturalist tendencies of the humanities and social sciences, which stress complexity and density against the supposed ‘reductions’ of critique. Now, cultural depth and fragmentation limit any ‘global’ or ‘totalising’ impulse, with the alternative of the local, the micro, the fragment, the detail, and all the mappings and connections of the shards of the social. In the place of critique stands the affirmation of the micrological and the density of the world. Too specific or too baggy, critique, it is claimed, can neither encompass the powers of creation nor the density of the life-world. 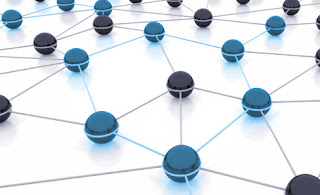 The squeezing out of critique between these forms of affirmation leaves it reified into the reductive, the negative, the old-fashioned, the miserable, the shabby and down at heel, and all that doesn’t belong to the glossy new times, despite the fact that the new itself is well and truly tarnished. Critique is characterised as mordant and miserable, and the reasons for this are conveniently forgotten. Those who cling to critique now seem like Le Carré’s Smiley’s People (that ironic name): relics from another time, fighting old battles, remembering too much, not able to forget, to move on, trapped in a theoretical ‘cold war’, unable to say ‘bye, bye, Mr Critique’. Instead, the slogan of the present moment might be that ascribed to Foucault – a ‘happy positivism’.

Happy are the victors, that’s to be expected: the sanctioning of things as they are in the faux wonderment of the reticular tracing of the ‘richness’ of the present; revisionary ‘complexifications’ that dissolve revolutions and popular movements into elite manipulations, the world of statecraft, and the refined manners of our betters; awed contemplation of the infinite depth to be found in objects and the ‘real world’; the inexhaustible creativity manifest in endless subversions and the mimicry of power; the micro-games, the formations of cultural capital, the inverted snobberies that praise the people as long as they don’t intrude too far onto the stage of history; the techno-fetishist analyses of the baroque instruments of military and financialised control, as well as that of the desperate counter-gestures of the weak; everywhere depth, density, complexity, richness, novelty, creativity, in a litany that becomes shriller as its contents become thinner.

Less explicable are the claims to happiness by the defeated. The re-articulations of radical theory, however, take on a stridently joyous tone of monumental construction, metaphysical daring, and political commencement. Joy, definitely taking on Nietzschean and Spinozan notes, is the mood we are supposed to adopt. Of course, the infinite flexibility of such ‘joy’ – given its form in the jouissance that absorbs and alchemises pain and pleasure, that takes negativity into superior processes of dissipation and excess – strikes again for an unlimited power that encompasses and affirms nearly all affects. Of course, melancholy notes are also struck, but again these tend to a new excessive affect that refuses the quotidian processes of mourning. Grand pleasure or micro-pleasures, joy unconfined, even the return of the revelling in catastrophe, only pleasure seems worthwhile. 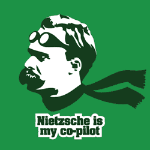 Perhaps the irony of the moment is that, while Nietzsche is not as often invoked figure these days, this disappearance is the sign of his absorption into our very common sense. The Nietzschean suspicion of critique as mere disguised Christian moralising, the Nietzschean invocation of the will-to-power and the eternal recurrence, the Nietzschean attention to genealogy, rank, and the historical stratifications of the world and, not least, Nietzschean pathos, shorn of the more distressing elements of hierarchy, heroism and the martial, pervade the theoretical articulations of the present. A decaffeinated Nietzsche, to borrow Žižek’s phrase, although there are still some around touting variants of a fully-caffeinated Nietzsche as well.

Critique, then, seems at once too grand a concept, capturing too much, reducing too much, for the prophets of piecemeal social science and, at the same time, too limited a concept, unable to break the shackles of the present, for the taste of the theorists of excess. It is aligned with the misery of the present, with the resigned acceptance of the ‘bad new’ (although I would add that this is better than simple despair or, even less tolerable, a vile exaltation in just how bad the new can be). What has broken the possibility of critique is the waning faith in the uncomfortable space of embedded rationalities and actualities that cut across narratives of defeat and recommencement. The possibility of the rehabilitation of critique would seem to lie in the capacity to break its reifications and to attend to this strategic space. 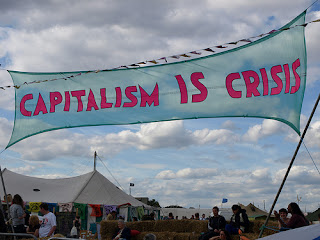 Capitalist crisis, as Lukács remarked, reveals the unity of the capitalist system, but it appears as disintegration. This effect would seem to reopen the possibility of critique. Where once ‘capitalism’ was a dirty word – flagged at most in the nominalism of capitalisms, or the euphemism of ‘market societies’ – the effect of capitalist crisis has made its ideologues all-too happy to admit its globalising and totalising existence as an object to be saved. The global and total is readmitted as the true site and space of capital, as the untranscendable horizon of our moment. And yet the disintegrative effects of capitalism seem, now, to make ungraspable any ‘rational’ possibilities, any actualities in the midst of disintegration. The big banks, which for Lenin promised to be the basis for socialism once the capitalist integument was removed, do not seem redeemable at all, except in the cause of restarting capitalism and inaugurating a new round of creative destruction.

Irrationality was once a word once negatively associated with capitalism by the left and then, certainly in the moment of the 60s, more often reclaimed or reworked into a positive valence, now it seems to return as the hallmark of a disintegrating capitalism. What is missing is the possibility of a counter-rationality, the possibility of critique taking the measure of capital, rather than invocations of counter-sublimes or new radicalised ‘immeasurabilities’.

The rehabilitation of critique, it seems to me, lies in the capacity to break its own reifications through the attention to the strategic dimension of critique that operates in that uncomfortable space of the ‘bad new’. The key difficulty here is that of the agency of critique, as the fading of critique seems to be correlated with the forms and agencies that seemed to incarnate its historical function. The thesis of the ‘end of programmatism’ articulated by Theorié Communiste, and implicitly widespread, is that the end of identification with ‘workers’ identity’ and the political forms associated with this, should usher in a new disidentification, and new forms of radicalism not bound to those ‘old’ forms. In fact, however, the politically-engineered collapse of those forms has not produced much evidence of a ‘rebound’, and much of the affirmationism of the present either revels in this fact, promises a new radicalised alternative detached entirely from the conditions of the present, or both. A more nuanced and dialectical understanding of the ‘end of programmatism’, attuned to the fact of the political offensive of neoliberalism and of what persists in the ‘remnants’ of programmatism, is more effective than simply resigning ourselves to its defeat as the hidden sign of true progress. It also attunes us to the complexity and strategic possibilities embedded in those previous forms, as well as tracing out the necessary elements of engagement with the ‘bad new’ of workers’ identity, including the persistent identification with the working class. 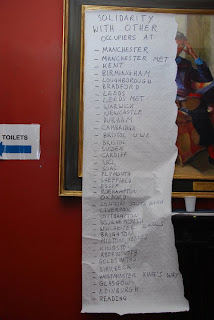 The question of agency and institutional forms remains problematic of course, not least as the remnants of those forms come under continuing and sustained assault. Critique, at least as a ‘theoretical practice’, cannot be expected to simply solve this problem; if it were that simple then matters would be considerably easier and more hopeful. Instead, I would argue, the necessity of critique still lies in its probing of the conditions of the present and, to use Gramscian terms, in the continuing and unwavering critique of the ideological ‘common sense’ of domination. What I have elsewhere called the ‘grammar of neoliberalism’ – its penetration into the thinking of opposition, of counter spaces, its reuse of tropes of care, community, and implicit privatisation of personal and state functions that resist the disembedding effects of the market – must be critiqued, as an immediate task.

The invocations of radical imagination, of the valence of utopia, of transcendental ‘ideas of communism’, and so on, seem to me to forgo or forget this labour. Motivational as they may be the effect of such receding moments, whose empirical instantiations are often questionable or vague, is to offer false consolation. What they promise is the affirmation of a radical negativity or excess that never deigns to consider the forms and structures of instantiation and persistence. The momentary or the exceptional is valorised at the expense of a strategic thinking of maintaining and implementing. They perform a holding function, certainly, but one that threatens to recede into the merely utopian and hortatory. The alternative to imposed ‘happiness’, to demands for the requisite positivity, and to the outbidding power of joy, is not enforced misery or cultivated unhappiness. Breaking the reifications of critique, as nihilist or elitist destruction, or as the mordant refusal to ‘get on side’, requires that we do not accept ‘things as they are’, including the ‘good news’ of evangelical political promises. A certain stubbornness, a certain courage, a certain realism (which would not fall in its disabused cynicism), seem to me necessary virtues, to use another unfashionable word, of any future critique.

In a piece on festschrifts for the LRB (subscriber only) - in this case for once left-leaning historians (or two of these)  - Susan Pedersen notes they exemplify 'how through some opaque process of affiliation and acculturation, historians defending empiricist methods and resisting monocausal explanations float to the top of elite institutions' (32).*

Now, the process might not be completely opaque (irony is probably well-intended) as they initially seem to have gone to these institutions ('All did Dphils at Oxford') and, we could add, the obvious explanation of class politics. Complexity is for those who can afford and enjoy it, it speaks to a certain experience of that fraction, hence the plumpes denken ('crude thought') of 'monocausal explanation' (read 'Marxism'), seems so unutterably vulgar, yet so obvious to those who don't share that 'richness'.

Of course, the targeting of particular strategic moments (revolutions, popular dissent, etc.) by these 'complexifiers' indicates a precise awareness of the stakes involved, as does a 'practical materialism' about careers / academic power structures / institutions etc. Hence 'monocausalism' is both accepted as a truth and distantiated or diavowed precisely on the 'material' basis of class/social position.

* the sentence continues with this slightly snide, and typical, remark 'while those on less elevated perches stud their prose with the latest theoretical terms and pose and prophets of dissent.' There is something more to be written on the theorist as parvenu (to use Gilberto Perez's negative characterisation). Here the implication of posturing ('pose') seems to cut against academic ability and sincerity, staging theory, in Bourdieu style, as a power-game to seize academic reward. No doubt some do this, although I can't recommend 'high' theory as a tactic, but the pseudo-sociological explanation rests on that snobbery identified by Ranciere - don't get above your station, don't try any fancy (foreign) ides, you're on the make for coming from the 'wrong' class fraction... etc.
Posted by Benjamin at 03:24 No comments: