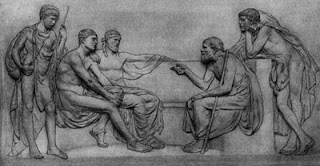 [1] Philosophy is constituted by its refusal of sexual desire, from the moment when Socrates refused the advances of Alcibiades to the diagnosis of this “sickness” of philosophy by Nietzsche. Since this diagnosis a slow reversal has taken place – a refusal of this refusal of sexuality – and the embrace of new philosophies of desire. On the one hand, the asceticism of philosophy now leads a hidden existence, concealed within the fastidious technical research programmes of analytic philosophy. On the other hand, we have the embrace of desire, perversion, and jouissance by libidinal materialists, certain Lacanian liberationists, and all those “thinkers” of excess, transgression and subversion; slogans as perfectly at home in modern advertising as they are in “thought.” The great refusal is precisely a refusal of these two symmetrical and complementary orientations. In fact they must be regarded as two deviations from the correct line of theory: the right-wing deviation of an attenuated asceticism and the left-wing deviation of a triumphalist but hollow celebration of desire. 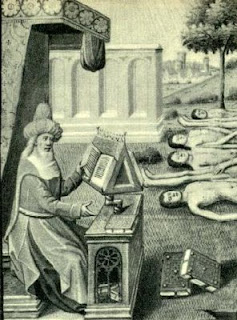 [2] At the limits of each of these deviations stands a figure: Origen, the church father, at the limit of asceticism, and Sade, the libertine without reserve, at the limit of desire. In the case of Origen his self-castration indicates the fantasy of an end to all desire gone to an extreme, but also an absolute refusal of desire, and of the world, a purity that resists all worldly corruption. Ambiguous and inaccessible his experience is the deviation of an ascetic attempt to embody the Angel and to singularise the Angel in a new figure of mastery (the Church Father, precisely) – although an ambiguous one. It will be the Great Proletarian Cultural Revolution that will restore this figure of asceticism as the eternal Rebel: the people, that is to say, the proletariat. It therefore frees Origen’s self-castration into the new figure of rigorous self-criticism. Sade stands at the other pole as the “scandalous” philosopher of desire (Philosophy in the Bedroom); but so feted by his disciples that, as Bataille noted so long ago, he becomes a capitalised object of exchange. The writing which he cried tears over the loss of is now incarnated on the Internet, as long as you pay by credit card for 120 days. Does Sade have any use-value? Only perhaps in his apathy, composed of satiation, exhaustion and boredom, and giving birth to a new asceticism of jouissance. 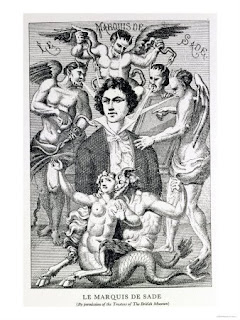 [3] Sade was used by philosophy to give birth to the “porno-world.” We have been “liberated” into this world and the philosophers of desire are its ideologues. This is a world in which pornography loses its place at the limits of the writable and becomes the mode of writing, the mode of representation. The flesh blocks rebellion in the name of the rebellion of the flesh. All that world provides us with are the semblants of liberation: sexual freedom (that is the freedom to only ever be sexual); new sexualities (as miserable as the old); subversion (as long as it is within the limits of reacting against hegemonic heterosexuality), the celebration of the flesh (as long as it is the right flesh, young enough or malleable enough to the demands of the market). Its material base is “sexuality,” a material structured by philosophy even as philosophy recedes into sterility. Sex-positive, sex-negative: Tweedledum or Tweedledee, always circulating as the inscription within philosophical space and the porno-world as its correlative.

[4] Origen and Sade remain, despite their problematic status vis-à-vis philosophy, the reference points for the great refusal: a double refusal and a double transvaluation. The result will be a theory that sets itself to destroy the porno-world and its base in the material of sexuality. This detachment is not a new asceticism although it will resemble it, even less is it some sex-positive discourse that concedes to porno-chic. Pornography, in all its violence, disgust, misogyny and horror, is more accurate and truthful than the prophets of “sexual happiness,” fascinated by the surfaces of the porn-world. Instead to be without-philosophy is to be without-sexuality. Not neuter, castrated, or asexual, but with the theoretical knowledge that there is only jouis-sans. The porno-world is the production of a fantasy of complete jouissance, either to be refused (in the name of a reactionary religiosity) or to be embraced (as a world of machinic assemblages of desire, for example). To destroy this world involves the destruction of this support (of jouissance), this relation (to jouissance), which denies the lack of a sexual relation. Without this destruction or subtraction of the faith in the semblant of a fully present jouissance there is no possibility of not remaining in the porno-world. 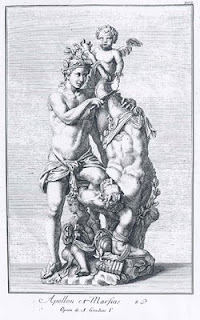 [5] The great refusal is the stripping away of the all the semblants of (full) jouissance. For the neo-Platonists of the Italian Renaissance stripping away of the worldly involved two (linked) series of metaphors: those of ascent to the One (via ladder, etc.), and those of destruction of what exists (flaying, etc.). That is to say, in the language of Alain Badiou, the twin practices of subtraction and destruction are the twin practices of without-philosophy, contrary to the world and the sexed/sexualised body. What is essential here, although it can no longer be thought under the terms of a “practice,” is self-criticism (as criticism of the self). First this will involve the subtraction of the people from the porno-world (“ascent”), and then the destruction of that world (“flaying” the semblant). This will be an askesis (which is not, as Foucault pointed out, an asceticism) of the theorist as an askesis of a (lacking) jouissance. The paradox is of stripping ourselves of the semblant that we lack, without then conceding to another Master. This must be an eternal practice of rebellion against sexuality as the infernal blockage of all rebellion – a kind of chastity of theory and the theorist in the name of the great refusal of all that links us to the world and (its) (pro)creation.

Orginally published as Editorial 4, Sans-philosophie.net (2006)
Posted by Benjamin at 04:57

This is fucking awesome.

Thank you, I must admit to finding it all rather embarrassing now...

Very interesting Ben, as always, will post a response soon- but why do you tally libidinal celebration of desire with a hollow leftism, when it is this very celebration which has been so frequently associated (by its critics) with an isomorphy with the activities and cultural logics of capitalism (and the right, if not the conservative right, then the neo-liberal or libertarian right).

Wonderful post indeed, which I had read only too quickly at Sans-philosophie a ways back. Just some scattered points, thoughts:

Simon Critchley, in a recent talk on mystical anarchism (a la Vaneigem's reading of free spirit heresy, but less mystical and anarchic) at Brooklyn College grad conference, indicated an interest in chastity as site of vague anarcho-political becoming.

This is clearly ahead of what his argument will likely be, particularly as you are doing with "these two symmetrical and complementary orientations" something homologous to what Meillassoux wants to do with religion/atheism, post-synthesize them.

In psychic terms these complementary orientations correspond to repression and indulgence as superiority and inferiority complexes, respectively. The ascesis you call for attacks the craving, the false construction of life, at the root of both.

Of course I want to hear more about the practical (without being 'practice' or discipline as such and so on) of such a self-critical ascesis of theory, or theory itself as mode of self-critical ascesis (because we are talking about already-dead living beings here, not "theory" as some project to which energies are owed, right?)

On this point, ascesis as the return of something to itself seems crucial (cf. Marx's return of labor to itself), especially as such return is PLEASURABLE, a term which I think needs room to breathe in the argument. Chastity, a psycho-physical pleasurable withdrawal from false opposistes, is theory-as-pleasure (?)

How I wish y'all could make the black metal theory symposium!

Thanks all, I actually find it hard to reconstruct the mental state in which I wrote this, which obviouslt tallies with certain positions I've gone to develop and not others.
On the correlation with leftism I'd say this was an early version of later doubts, with my suspicion at the point falling on the avowed self-positioning of lbertarian celebrations of desire; the later criticisms of accelerationism in a sense develop the point to its correlation to capital. It is simply undeveloped in this early piece - polemical verve replacing actual argument.
On the acsetic I think implicit is a certain 'angelism' qua Lardreau and Jambet, but also an interest in a number of feminist interventions in the 1970s. I'd have to unpack this further. In terms of asceticism in relation to theory / practice this was always the stumbling block (skandalon) of the sans-philosophie pieces I wrote. They tended to shear off into 'beautiful soul' territory (something I know L&J valorise). In some ways I'd see acesis as the refusal to tell lies or deceive ourselves and the extinction of the self (cf. my other arguments on the refusal of the creative ideology). I am actually planning to read Simone Weil and look at her concept of decreation. I was wondering about a reversal or complication of my previous endorsement of Bataille against Weil. In fact they form a strange kind of pseudo-couple in which Weil's asceticism comes full circle in its extremity to Bataille's libertinage (one story tells that Weil's self-mortifiying tendency not to wash used to disgust the peasants she had to work with - a strange kind of Maoist imperative derailed by the excessiveness of the identification).
This may be continued or may not... but please if it generates something better than it is that would be wonderful

I have just installed iStripper, and now I enjoy having the hottest virtual strippers on my taskbar.