I'm not so fond of Foucault, it's because he's always saying, "During this period, people thought 'A,B,C,'; but, after such and such a precise date, it was thought, rather, that '1,2,3'." Fine but can you really be so sure? That's precisely why we're trying to make movies so that future Foucaults won't be able to make such assertions with quite such assurance. Sartre can't escape this reproach, either.
Godard, 1967
Posted by Benjamin at 04:11 3 comments: 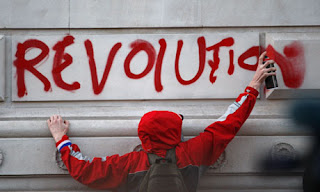 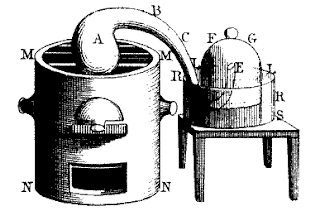 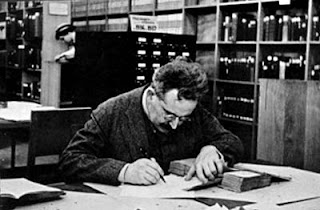 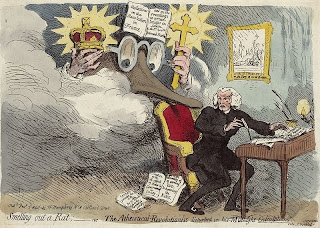 Mr Burke also took time to target Goldsmiths lecturers' support for the protests, arguing that: 'These philosophers are fanaticks; independent of any interest, which if it operated alone would make them much more tractable, they are carried with such an headlong rage towards every desperate trial, that they would sacrifice the whole human race to the slightest of their experiments.'
Posted by Benjamin at 04:52 2 comments:

For some reason much of my current reading seems to be converging around problems of vitalism, so thanks to Federico for this link, which has much material (and much I can't read thanks to unforgiveable linguistic incompetence), including texts by Federico himself. I'm also hoping to make it to the Zagreb conference on vitalism next year ('To Have Done with Life'), which is looking more and more like a crucial event.
My paper for HM is currently being re-drafted, 'worsened' (a la Beckett), for the JCGS, if it doesn't get turned down. Caught in the 'grief' of completing the book (thanks to Michael Holroyd's excellent talk at our University for this formulation), but if I can only combine current interests (Kierkegaard, Lefebvre (on dialectics), Rousseau on political economy) then perhaps something will emerge from that, after writing a piece on 'Debord's Time-Image' and editing the communization collection.
Other, better, people on grading protest, on nothing changes but everything gets worse, on the British misery, hostile objects, Greece as crucible of protest, the Italian misery (pdf), and, courtesy of the Institute, Marcuse on student protest.
Posted by Benjamin at 04:32 3 comments:

‘There are two ways of rescuing the Idea of communism in philosophy today: either by abandoning Hegel, not without regret, incidentally, and only after repeated considerations of his writings (which is what I do), or by putting forward a different Hegel, an unknown Hegel, and that is what Zizek does, based on Lacan (who was a magnificent Hegelian - or so Zizek would claim at first explicitly and later secretly, all along the way).
Alain Badiou, The Communist Hypothesis, trans. David Macey and Steve Corcoran (London and New York: Verso, 2010).
Note 6 pp.237-8
I've been listening to Alexander Galloway's lectures on contemporary French thought, although still waiting for the one on Laruelle, and he offers an interesting mapping of the current 'moment'. He distinguishes between those in search of the absolute versus a re-articulation of historical materialism. Broadly, I'd say, he follows Peter Hallward's articulation of contemporary French philosophy as dominated by 'singular' orientations, although Galloway splits this into quasi-Hegelian/Idealists of the absolute (roughly Malabou/Zizek) and realists of the absolute (Meillassoux and the speculative realists). Badiou's probably falls slightly uncomfortably here, and it would be interesting to hear Alexander's reflections on the 'broker' of many of these currents.
Also, I'd say that these figurations of the 'absolute', although often opposed to the Derridean/post-structuralist disenchantment with metaphysics, are definitely post-Derridean in quite a strong sense. Explicitly so in the case of Malabou, but also implicitly in Zizek (Zizek's Hegel is post-Derridean, whether Zizek likes that or not), and we could also say in terms of Badiou's ontology of sets, or Meillassoux as well. These 'absolutes' are not the usual forms/substances of so-called 'trad metaphysics'.
Galloway's own alternative 'historical materialism' is articulated through a Deleuzian/Marxian mix, with a little Stiegler, to reformulate the confluence of thought and control as the condition of thinking liberation. In terms of 'camps' I find myself in his, in that I'm more concerned with the immanent political forms of resistance, rather than some metaphysical or post-metaphysical absolute. It was interesting to hear the quote from Heidegger (presumably the 'Letter on Humanism'), in which Heidegger opposes his own engagement with the truth of Being to Sartre's engagement on behalf of beings. I'm for the ontic in this case...and so, I guess is Alexander (also interesting to think Badiou's project, especially in Being and Event (his most Heideggerean book) as the squaring of this circle).
Posted by Benjamin at 07:29 7 comments:

A process of deterioration in the human race cannot go on indefinitely, for mankind would wear itself out after a certain point had been reached. Consequently, when enormities go on piling up and the evils they produce continue to increase, we say: "It can't get much worse now." It seems that the day of judgment is at hand, and the pious zealot already dreams of the rebirth of everything and of a world created anew after the present world has been destroyed by fire.
Kant, Conflict of the Faculties
(Thanks to Jessica)
Posted by Benjamin at 03:49 No comments: