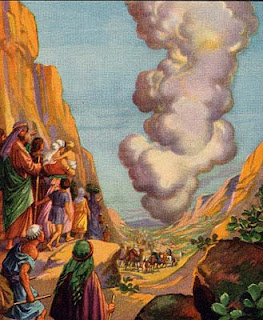 "The skeletal structure of the exodus [abrupt deviation in the axis of discourse] is faithfully reproduced, though in the Lilliputian dimensions, by the countless jokes I have examined before. Let us recall at least one of them. A gentlemen in financial distress obtains a small loan from an acquaintance. The following day, his benefactor chances upon him in a restaurant eating salmon and mayonnaise. The gentlemen reprimands him resentfully: "Is that what you've used my money for?" "I don't understand you", replied the object of the attack; "if I haven't any money I can't eat salmon mayonnaise, and if I have some money I musn't eat salmon mayonnaise. Well, then, when am I to eat salmon mayonnaise?"
(from Freud)"*

This is Paolo Virno on the strategy of exodus from his latest work to be translated Multitude: Between Innovation and Negation (discussed at length in an excellent post by Steve Shaviro). I really just don't get the strategy of exodus. Of course I understand the idea of (line of) flight, displacement from existing structures, the evasion of factory labour, and (god help me) the flight of the Israelites from slavery (if only I'd paid more attention in Sunday school now I would be more likely to be an internationally-famous theorist). I'd simply like to hear about more concrete examples, especially in the current context - in particular what we might call self-consciously political strategies rather than 'objective' instances of exodus (ie form of economic migration).**

Even in terms of the joke it's hard to see it as a simple instance of successful displacement, but rather a recognition of the imposition of the impossibility of displacement. Within the framework set-up by the self-styled donor what the recipient registers is that they can never eat salmon mayonnaise (although of course they are - perhaps that's the displacement). It reminds me of "jam tomorrow, jam yesterday, never jam today".

* in case this has made you hungry here's a recipe for salmon mayonnaise
** I find particularly unconvincing the reading of such instances as really being examples of political activity:
"I do not believe that these migrants are only trying to escape poverty; I believe they are also seeking freedom, knowledge and wealth. Desire is a constructive potenza and is particularly powerful when it is implanted in poverty: poverty, in fact, is not simply misery, but is also the possibility of very many things, which desire indicates and labour produces. The migrant has the dignity of the person who seeks after truth, production, and happiness. And this is the strength that breaks the enemy's capacity to isolate and exploit, and which removes, together with the supposed Prometheanism, every heroic and/or theological tendency from the behaviour of the poor and subversive." (Negri, Reflections on Empire, p.30) While not denying any agency to migrants, and seeing them as passive subjects of capitalist processes, one has to inquire into how exactly this agency will form itself into resistance. On these problems in the context of internal migration in China, see this.
Posted by Benjamin at 03:10