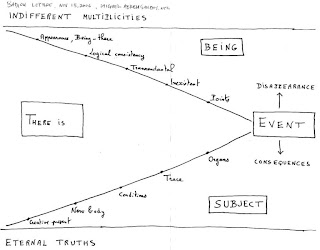 Oliver Feltham's Alain Badiou: Live Theory (2008) offers an elegant and ingenious solution to introducing Badiou: tracing the way in which his work thinks change. He traces this through three sequences: the Althusserian, the Maoist, and set-theoretical. Why I found the book particularly engaging was that it foregrounds the question of the historical in Badiou's work. It does so through a rather strange bestiary, in part (I'm guessing) derived from Bataille's "The Old Mole and the prefix 'Sur'". We have the eagle: the figure of decisionism and abrupt rupture. Feltham's elegant (and Derridian) solution to the problem of whether Badiou is decisionist or not is instead to argue that this one stratum or moment in his texts. We have the old mole: the figure of patient tracking and analysis of situations (and the figure favoured by Feltham). Finally, we have the "owl" (Minervan obviously): the figure of the long-distance vision of change.
It is this final figure that interested me, partly because I have tended to associate Badiou more with conjunctural rather than long-term perspectives and partly because it intersects with my own project on longue durée Marxism. The owl seems to play a strange role in the text; on the one hand it can lead to a "right Badiousianism", in which interventions and truth procedures pass on one to another, leading to new situations but seemingly without much sense of progress. This is something like the accusation of the "randomisation of history" Perry Anderson levelled at post-structuralism (yes, he will appear in every post...). On the other hand this perspective of the owl is one from which "the occurence of events is assured; they may not happen everywhere and all the time, but events have occurred and will occur." (105) In a sense then the "owl" guarantees change. So, we have a play of three moments and this, interestingly, seems to correlate (in a way) with Braudel's division of time into structure [owl], conjuncture [mole] and event [eagle].*
There is far more to Feltham's book than this, including some fascinating remarks on the evental site and a re-writing of Badiou's de-throning of philosophy in terms of overlapping incompletions. There is also a highly amusing, if rather short, interview with Badiou himself. This is one of the debits, along with a lack of full discussion of LM** (perhaps due to reasons of space), some problems in the bibliography and rather odd indexing. These problems should not discourage you from buying or otherwise "obtaining" the book. After Peter Hallward I had thought another introduction to Badiou would be pointless; Oliver disproves this.
*This division could also be linked to Immanuel Wallerstein's recent paper on the future, in which he suggests political strategies for operating at these different temporal "levels" (a paper I will discuss in a future post).
** advertised as the "sequel" to Being and Event - prompting Alberto to joke perhaps they will advertise Theory of the Subject as the prequel...
Posted by Benjamin at 04:20