Mario Tronti is most well-known for his series of seminal essays collected in Operai e Capitale (1966), which argued for a Copernican revolution in Marxism:

[w]e too have worked with a concept that puts capitalist development first, and workers second. This is a mistake. And now we have to turn the problem on its head, reverse the polarity, and start again from the beginning: and the beginning is the class struggle of the working class. (from Lenin in England 1964). 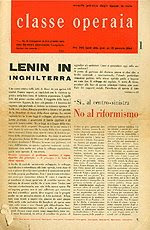 What is slightly mysterious is that although these early essays are available in translation and online (and a new translation of the entire work is due from mayfly books), there is a comparative lack of discussion of Tronti's later career. This is partly remedied by the tantalising article by Matteo Mandarini 'Not Fear but Hope in the Apocalypse'.
Crucial is the "turn" in the work of Tronti and others associated with the journal Contropiano (Alberto Asor Rosa and Massimo Cacciari). This involved an insistence on the "autonomy of the political" and a return to the PCI. Overturning his earlier insistence on a direct antagonism between labour-power and capital (maintained by Negri, who split from the group), Tronti now insisted on the political as mediation - "political mediation that the party expresses at the institutional level." (Cacciari) To simplify, we might say "organised autonomy" saw the possibility of leadership developing outside the PCI through the new forms of worker radicalism, and would later, in some instances, dissolve itself into the movement. On the other hand Tronti and his comrades regarded the PCI as necessary mediator, and saw more signs of fading of working-class power.
This was the call to organise class power politically rather than economistically (and we might add this economism has been a problem haunting Negrian analyses). Tronti's take in 1978 indicates the difficulties:

There are two conditions for the centrality of the working class to function politically. The first necessity is that factory workers are surrounded by a large penumbra of social consensus, the second that their effect on the political and their relationship to institutions remains stable over a long period. It must be made evident and perceptible, with practical actions, that this state must be simultaneously defended and changed. What must be defended are the formal guarantees, the constitutional mechanisms of equilibrium and the significance of the political agreement between the democratic parties. What has to be changed is the significance of power, the functioning of the decision-making mechanisms, the guidance of the economy, and the control, consumption and application of social wealth.

This "politics in the institutions" obviously risked substituting the party for the class - "the autonomy of the political" leading back to the realism of politics.
Drawing on the indications in Matteo's article I want to suggest that the continuing functioning of the thesis of the "autonomy of the political" in Tronti's work, especially as an acerbic critique of democracy, has a functionality that this quasi-reformism would seem to vitiate. Despite his dropping of the direct antagonism of labour-power and capital it appear that Tronti still maintains the negative vocation of his early theses against their positivisation in Negri.
Taking a similar theoretical path to Cacciari (although more Heidegger / Schmitt than Benjaminian) Tronti remains linked to the concept of "minoritarian agency" and working-class partisanship, rather than Cacciari's own "mystical" turn. Here then is a rare example of a negative thought still committed to a conception of political agency and not conceding to the mystical or to the various "new positivities" of the affirmationist consensus. Tronti maintains the necessity for a ruptural "Nothing" and the right to rebel.
Posted by Benjamin at 05:53

Does refusal = negative thought? John Holloway seems to think so. Maybe I don't understand "negativity," because I don't read early Tronti -- sadly, I can't read late Tronti -- as negative. The link to the minor would, for me, confirm that it's not.

Can you elaborate a bit on how it's negative?

Eric, thanks for the comment - a very good point.
Well, perhaps I'm bending the stick but reading Matteo's article it seems that Tronti's later work inscribes a 'Nothing' as the interruptive to the 'smooth' unfolding of democracy qua counting (as Matteo points out close but not identical to Badiou or Zizek's position). I don't think refusal itself equals negative thought because, as Negri does (see Reflections on Empire) we can regard refusal as a positive strategy, uncovering or making available the ontological plenitude of the multitude as a set of positive strategies (a similar strategy is at work in The Exploit by Galloway and Thacker). I think then it is where refusal emerges from or goes to (to be simplistic, which is probably the level of my understanding...). Does refusal come from an existent positivity - whether the multitude or the exacerbation of capitalist tendencies - and does it go to a new positivity - recovered potentia read as positive (in a sense Agamben is still the uncanny figure here, hence Negri's constant turning of bare life into ontological vital plenitude).
Tronti, as I said above, seems to inscribe refusal in relation to a decision based on 'Nothing'. As you say it may be through the 'minor' he re-opens this as a new positivity (I actually think it could be possible to read the minor as a strategy of negativity, but that's another business that may tangentially make it into my book (or not)). I'm suggesting that there may be a non-dialectical negativity here, precisely in what Negri considers to be the fault of Tronti - the risk of dialectical symmetry with capital. In my reading this opens negativity as a corrosive effect of intervention.
I'm sorry this is vague and it may be that I'm simply wrong (its been known). I can't say my book will resolve the problems, but it may at least make them worse...

Hi , thanks for sharing your information.The insights are really helpful and informative. If you want to learn about POLITICS, this will be the rightplace for you.
Election Consultant company in India
political marketing companies in india