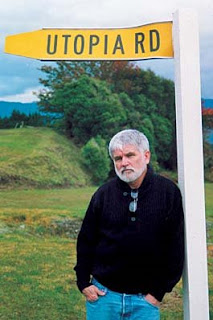 It has happened, at least according to Mike Davis (and the twenty-one members of the Geological Society of London commission). We have departed the Holocene - a 10,000 year inter-galcial warm period that happens to encompass the history of human 'civilisation' (cue Ghandi's joke) -for the Anthropocene - a new 'stratigraphic' interval dated from 1784 and the invention of the steam engine. The result, Davis forecasts is that:

the current ruthless competition between energy and food markets, amplified by international speculation in commodities and agricultural land, is only a modest portent of the chaos that could soon grow exponentially from the convergence of resource depletion, intractable inequality, and climate change. The real danger is that human solidarity itself, like a West Antarctic ice shelf, will suddenly fracture and shatter into a thousand shards.

I won't dispute the science, because of a lack of ability, or Davis's diagnosis, which seems to indicate the existent tendencies - an abandonment of large swathes of humanity coupled to retreat into the 'Evil Paradises' of neoliberalism by the rich. Of course it gives an entirely new meaning to Rosa Luxemburg's alternative of socialism or barbarism. Not only does this 'choice' imply barbarism will operate in the absence of socialism, it now implies barbarism can bring an end to habitable existence for most of humanity and so the possibility of socialism. In Luxemburg's formulation the choice was uneasily tied to historical necessity. [1] If we doubt that necessity - immanently operating through the existent contradictions - then the prognosis is bleak. The Pasclian wager on revolution, whether activist or not, has its own expiry date.

Worse than that, if Davis is correct (and contra optimists like Negri) the existent tendencies are steadily eroding any possiblity of human solidarity that would be necessary to stop barbarism - whether that took the form of 'revolution' or any other sort of collective action for equality. The 'historical necessity' then appears (and I'd be happy to be wrong) to be moving in the opposite direction.

That said, and perhaps fiddling while Rome burns, I always find something disturbing about the tone of the work of Mike Davis. His work displays a taste for the apocalyptic and an evident interest in the technical details of destruction. He displays, to quote Guns n' Roses (never thought you'd see that) an 'appetite for destruction'. Thinly veiled by diagnosis it seems that a desire for destruction and apocalypse seeps through - car bombs on the streets of Los Angeles, 'burn, Malibu, burn', and the 'anarchist avengers'. One has to suspect that this is a result of the seeming disappearance of agency in the face of historical defeat. The recourse of Davis to biological metaphors here (and not only bio-history which is perfectly fine) disturbs because it threatens a good-old naturalisation of social relations. The 'typical', or at least typical of his worst books, Davis passage, involves summation of others research re-written in the style of William Gibson coupled to the techno-thriller via the new complexity theories. Everything is 'viral', 'coiled in DNA', or latched on to technical specifications (his Buda's Wagon (2007) makes him the Tom Clancy of the Left).

I can't say that I'm immune to the attraction of this discourse myself, through a toxic combination of childhood militarism (coupled to 80s nuclear anxiety), adolescent nihilism, and baseline pessimism.

[1] "We now realize the absolute truth of the statement formulated for the first time by Marx and Engels as the scientific basis of socialism in the great charter of our movement, the Communist Manifesto. Socialism, they said, will become a historical necessity. Socialism is inevitable not merely because proletarians are no longer willing to live under conditions imposed by the capitalist class, but further because, if the proletariat fails to fulfil its duties as a class, if it fails to realize socialism, we shall crash down to a common doom."

I've noted the same tendency in Davis myself (I'm a fan), and because I spent my adolescence in the very Los Angeles of the 80s/90s where Davis cut his catastrophist teeth, I too have a taste for apocalypticism of the sort Davis dispenses. I listened to that G N'R album quite a bit during those years.

Still, you know, the curious thing about the earlier Davis books is that when they aren't being apocalyptic themselves they're critiquing apocalyptic thinking as a tool of the ruling class.

thanks jasper for confirming my intuition. I think it is actually something about the divided nature of MD's work that produces this effect of desire. I was told Historical Materialism were trying to get something from him on his own method, and I'd be really fascinated to read that.

eToro is the ultimate forex trading platform for newbie and professional traders.