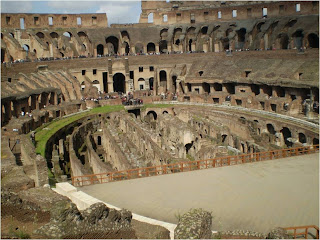 Now let us, by a flight of imagination, suppose that Rome is not a human habitation but a psychical entity with a similarly long and copious past – an entity, that is to say, in which nothing that has once come into existence will have passed away and all the earlier phases of development would exist alongside the latest one. This would mean that in Rome the palaces of the Caesars and the Septizonium of Septimius Severus would still be rising their old height on the Palatine and the castle of S. Angelo would still be carrying on its battlements the beautiful statues which graced it until the siege by the Goths, and so on. (Civilization and its Discontents, 257-8)
A conceptual art project for any digital architecture types who want to spend a long time in Rome: to recreate digitally Freud's fantasmatic simultaneous Rome qua unconscious (the Freud quote goes on in further detail for quite a long time). This is close, but not quite - although perhaps close enought to ruin your arts council funding bid.
Posted by Benjamin at 08:39