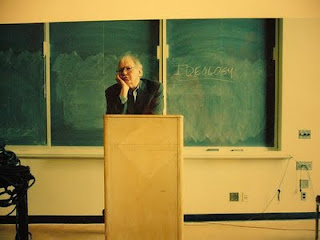 After the reading group on chapter one of Fredric Jameson's The Political Unconscious, hosted by the Institute, I wanted to post a few reflections. The first is that for a book with its famous motto Jameson's own references to literary theorisations seem very 1950s / 1960s: the new critics, Northrop Frye, Norman O. Brown, Greimas / Levi-Strauss. This is obviously not to condemn the book for being 'out of date' as such, but rather to note that this lag (for a book published in 1981) is not thematised as such. There is a sense, as the Institute pointed out, that the book seems to be trying to integrate an academic department with all its factions under the banner of Marxism, qua ecumenical / unifying principle. 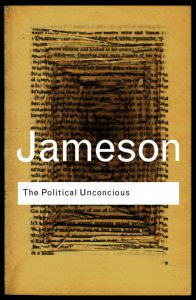 Also striking is the theological and quasi-organicist reference to the 'whole body' as utopian trope, taken up in a quasi-Durkheimian moment and in a truly bizzare instance (in the conclusion) tracked through Marx's invocation of the Asiatic despot. This moment in Marx is made to stand-in for his lost thinking of community, which is odd considering that it can be tracked through more 'positive' moments in Marx, such as his remarks on the mir / commune, or his references to human community (Gemeinswesen) (cf. Camatte), or his references to species-being (Gattungswesen). Barring some weird residual Maoism this deliberate provocation seems to be linked to Jameson's argument for a left politics of collective alliances versus a pluralism that mimics capitalist alienation.

This also links to Jameson's constant reference to the unity of history as singular narrative, which is then used to license (in a tricksy move) the necessity for a hermeneutic that can reconstruct and mimic this unified historical narrative. Again what is strange in terms of historicisation is that this conception of history as 'what hurts', as the Real, and as the 'absent cause', only present through and in the effect of its textual traces, is not regarded as an effect of capital. Marx famously noted that 'world literature' become available as a category on the basis of capital; Jameson, instead, argues that history was whole before capital, fractured and broken-up by capital, and will be whole again - seemingly through a joint political and cultural revolution, prefigured by the political hermeneutic that can gather the limbs of Osiris.

This para-modernist reconstruction of the traces / fragments seems to depend on a model of formal subsumption in which history stands outside of capital - both before, during, and after, we could say. Gesturing already to the problematic of the disappearance of 'nature and the unconscious' that he would take up in the Postmodernism book, we could say that later work takes more seriously the problem of real abstraction and real subsumption that immanatises 'History', reduced, we could say, from Jameson's capitalisation. 'History' would no longer stand for some external standpoint, nor completely subsumed in the paranoic sense, but rather as presupposed by capital, as 'internal' resistance to it.

The final irony of historicising Jameson, which I am sure he would not be resistant to. It seems that The Political Unconscious stands not only on the threshold of defeat, hence it is an oddly 'sixties' book (a category Jameson himself has analysed), but also on the threshold between formal / real subsumption - caught in an uneasy formulation that leaves 'History' and the 'Real' as (bad) Kantian noumenal rather than internal impasse.
Posted by Benjamin at 05:38

I think the appellation 'para-modernist' is spot on. On the other hand, I'm not so certain about the idea that capitalism is not 'what hurts', even for Jameson. The problem seems to arise from the fact that not only does FJ think of Marxism as enveloping, sublating and rearticulating other hermeneutics, but that he needs to perform his own Marxism as a second-order sublation of the various Marxisms he is responding to, principally of an Althusserian-Lacanian variety (absent cause, painful Real - what we could call, in a pastiche of Chakrabarty, History 0), on the one hand, and of the diametrically opposed Thompson-Williams kind , on the other (everyday life of struggles, which can be read through the distorting mirror of the dominant ideology, as in the heretical millenarianism of the sixteenth and seventeenth centuries). FJ is very slippery on the relation between the history that is only known through its effects in the Althusserian sense, and the history that is mostly known through its repression (of the kind that historians from below deal with). I think the History as Real is still linked to capital, because it is reification that creates these conditions of (un)intelligibility. But it is certainly true that in a further, and to my mind Kantian, conception of history as unified horizon (open for "communal" or associative redemption), FJ does toy with something which, if not fully transcendent, is still at a remove from capital, as some kind of humanist relative ideal.

Yeah, I agree with Savonarola. Jameson says in the end of that first chapter that history corresponds, ultimately, to "the mode of production," where MoP is the product/effect of the unreified process of class struggle that forms history. Big-H History (and not historiography) in this sense exists at the very limits of what capitalism is, since the capitalist MoP emerges out of past class struggle and its defeats and victories:

"But our own discussion began with the idea that a given social formation consisted in the coexistence of various synchronic systems or modes of production, each with its own dynamic or time scheme--a kind of metasynchronicity, if one likes--while we have now shifted to a description of cultural revolution which has been couched in the more diachronic language of systemic transformation. I will therefore suggest that these two apparently inconsistent accounts are simply the twin perspectives which our thinking (and our presentation or Darstellung of that thinking) can take on this same vast historical object. Just as overt revolution is no punctual event either, but brings to the surface the innumerable daily struggles and forms of class polarization which are at work in the whole course of social life that precedes it, and which are therefore latent and implicit in "prerevolutionary" social experience, made visible as the latter's deep structure only in such "moments of truth"--so also the overtly "transitional" moments of cultural revolution are themselves are themselves but the passage to the surface of a permanent process in human societies, of a permanent struggle between the various coexisting modes of production. . . The task of cultural and social analysis thus construed within this final horizon [that of history] will then clearly be the rewriting of its materials in such a way that this perpetual cultural revolution can be apprehended and read as the deeper and more permanent constitutive structure in which the empirical textual objects know intelligibility."

It's true that in Jameson's problematic appeal to narrative as a kind of Kantian faculty of mind, he does seem to think that there's some narrative transcendence of capital as such -- where he escapes this though, and where he hedges his bets, is in his particularly useful notion, as above, that the capitalist MoP incorporates all past MoP's within itself -- history in this way doesn't transcend capitalism but contains immanently within it the record of all class societies and all class struggle -- he draws upon Benjamin for this of course, as well as Ernst Bloch's notion of "nonsynchronous development" and, implicitly, Trotsky's "combined and uneven development."

I like this formulation, since it often escapes Marxists that a successful revolution must not only destroy capital, but dig even deeper, be even more "radical," and destroy all class society--ie the state as index of class rule. . .

It's interesting because the concept of mode of production is where Jameson's 'new hermeneutic' is most at risk from the Althusserian strictures he details in the long 'digression' on Althusser. I think the temptation, as I said in the reading group, is to justify the political unconscious in terms of its close mapping to a unified, singular history (cf. the relentless series of signifiers at the start of the introduction). Out of this, I agree, a more complex relation to History / temporality emerges.
It would be good as well to excavate the concept of 'cultural revolution', I don't know if this plays any part in his later work (perhaps in the Brecht book? - I've read it but can't remember...). That concept would appear to bridge history qua capital / qau mode of production with history qua collective self-fashioning / resistance.

hi, if you remember, you posted about Cacciari & Tafuri. reading (and getting amazed at) that I made my way to them. Here is Cacciari's "architecture and nihilism" scanned and made open source (in pdf format). I also finished scanning Tafuri, and will post it soon. Thanks a lot.