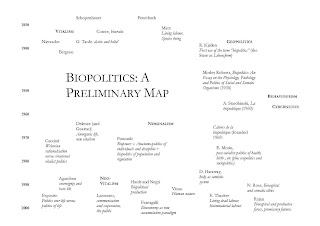 Marx's comment in the Grundrisse that labour is the 'form-giving fire'; Dipesh Chakrabarty noting Marx's vitalist metaphorics of 'living labour'; Colletti noting Lukacs quasi-vitalist thematics in relation to alienation; Gramsci's use of Bergosonian thematics of will / action filtered through Sorel; Deleuze's re-coding of Marx in terms of Bergsonian problems; Negri's quasi-vitalism of singularities of excess / biopolitics; etc.
Now, I'm obviously not that happy with regarding Marxism as a vitalism, notably because of my suspicions of vitalism as a 'positive' ideological complement to capital (in fact ,its 'fit' to the value-form in implying an irreducible excess of labour always available for tapping). But it's true that there is no immediate reason to argue that Marxism isn't a form of vitalism. After all the excess of 'living labour' over any disciplining into 'abstract labour' seems to imply a vitalist thematic. The question here, I think, is one of immanence. If Marx is positing an immanent antagonism, which I think is correct, when that antagonism seems to lose effectivity then we may turn to an ontological or anthropological grounding.
Even more tricky is that Marx's arguments concerning capital's dependance on living labour for value production seems also to imply an anthropological / ontological 'surplus', in that living labour can never be fully captured. Of course, this implies an historically determined conception of the human, but, no doubt, it is not difficult to ask where this capacity comes from; is it a 'constant' or 'invariant' linked to human anthropological capacities or the 'nature of Being' (this question arose for me around Daily's Humiliation's remarks on Hallward's concept of will).
The other tendency, which I find more interesting, is what we might call an excess of the negative or an anthropology of refusal. Rather than defining the human / Being in terms of some quality of excess in and over any capitalist 'capture' here it is a matter of a strategy of refusal within the extraction / disciplining of labour. This is give a purely strategic form in Tronti, given the philosophical / ontological form of im-potentia by Agamben, and inflected anthropologically by Virno. We might call it the Bartleby option. 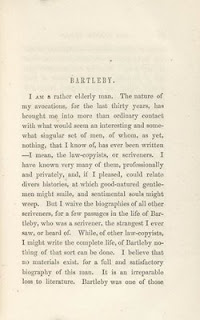 Again the question would be can this be given an immanent form in relation to the capital relation or does it require or imply anthropological / ontological commitments? I'm hoping the first, but the difficulty of evading the second, perhaps best thought out in Nina's generic equalitarian form of the 'human', is undeniable.
Posted by Benjamin at 03:42

Great post. I'm actually working on a project right now for Zer0 books, whose principle intent is to challenge vitalist readings of Marx.

My reading inflects the work on machinery and large-scale industry with neurophilosophical eliminativism, arguing that the distinction between living and dead labor/variable and constant capital is a sort of 'user illusion', which nonetheless possesses an effective hyperstitional status, lending valence to ever-expanding circulation of fictional quantities of capital.

The conclusion will try to sketch out a sort of 'immanent refusal' akin to what you mention here. Thought you might be interested. I'll probably post some notes on the project at my site sometime soon.

Teaching starts here in a couple of days, so I'm a bit out of sync with theoretical discussions at the moment but just briefly on this:

Even more tricky is that Marx's arguments concerning capital's dependance on living labour for value production seems also to imply an anthropological / ontological 'surplus', in that living labour can never be fully captured.

To me, this dimension of Marx's argument doesn't so much imply an ontological surplus of living labour - a position that would imply that Marx grounds his critique from the standpoint of labour, to use Postone's formulation. Instead, I would think Marx sees this centrality of living labour to capitalist production as one of the deeply peculiar historically and anthropologically specific traits of capitalist production - a centrality produced by and within capitalism, which marks it out as an historically distinctive social form.

So the focus on the centrality of living labour within a work like Capital is meant to play off against the equally central, but contrary, tendency to render the expenditure of human labour unnecessary in increasing numbers of concrete forms, as mechanisation and productivity increases render human labour unnecessary as a motive force in more and more areas.

The co-existence of these contrary tendencies is part of what helps make it possible to recognise the arbitrariness and artificiality - the social and historical dimension - of both - part of what helps us recognise that these trends are part of a history we make, rather than anything inherent in material production per se. (It gets more complicated than this, as it always does with Marx - because the tendency to denaturalise is accompanied by its own contrary tendencies, which encourage particular forms of naturalisation... But it's always impossible to do justice to the dimensions of the argument in a brief form...)

But my basic point is that I take Marx, not to be trying to underscore how living labour is always in some sort of surplus (although he also says this). Instead, I would take the strategic thrust of the argument to be: isn't it utterly irrational - isn't it the very marker of an arbitrary human custom - that living labour remains so essential to our material reproduction, even after so much technological advance? It should strike us as peculiar that human labour should be central - that, even as it is displaced by productivity increases in one area, it is frantically reproduced in new concrete forms. There is some peculiar sense in which capitalist production "values" - not material wealth, not the satisfaction of material needs - but human labour - and does this in a way that is both more direct and also more unintentional manner than previous human societies, which might have valued human labour as a means to other things, and effected this value through explicit law or custom.

I would see the centrality of human labour, not as an expression of vitalist commitments, but as the expression of a kind of incredulity: how can we possibly value human labour so much, why do we constantly continue to reproduce it so systematically, given all the contrary potentials our time generates? It's this historically specific puzzle, I think, that places labour at the centre of Capital.

(Apologies if this is very disjoint - I'm operating on a few hours' sleep a night at the moment - and it's a very small comment box :-) )

Planomenology, I'd definitely be interested, especially because I've yet to see a (for me) convincing articulation of neurophilosophical eliminativism as 'ideology critique'.

Nicole, thanks very much for a far more precise version of the kind of suspicion I have of vitalist readings and for linking more clearly than I've seen to the central contradiction of capital. I have often come at this question from the other direction: ie the Sahlins / Mauss / Bataille point that labour is not central to pre-capitalist formations and not given the kind of ideological weight Marx identifies.

The standpoint of labout critique, which is obviously the position of Chris Arthur, does seem to have the advantage of giving an 'eternal' existence to antagonism. Of course I'm with Postone that it belongs more to models of formal subsumption in which labour is externalised by capital itself. I think the desire for vitalist readings of Marx have come about partly due to the 'fading' of class struggle, or its weakening, which seem (and only seem) to leave immanent models as unable to counter what Cammatte calls the autonomisation of capital. Hence the suspicion of incipient pessimism hanging over all such immanent readings.

Personally I'm rather badly trying to articulate an immanent negativity vis a vis labour rather than the kind of positivity one finds in Arthur or Dussel. Hence my references to the strategy of refusal.