Theory and the PCF 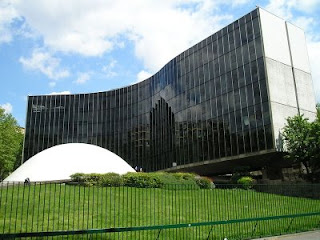 In the spirit of one of those Derrida footnotes that sets a near-impossible task for anyone who would actually take it up ("write a history of philosophy in terms of the telephone" - oh, someone did that) I've realised a project that I can't do but would be fascinating: write a history of French philosophy / theory in terms of the relation with the PCF. Obviously we have the debate between Sartre and Merleau-Ponty concerning the Party and negativity in the 1950s (due to make an appearance in the conclusion to The Persistence of the Negative). The key moment appears to be the 1970s and especially the "Union of the Left", which seems to have generated hysterical terror of the "gulag in France" (see Michael Scott Christofferson's fascinating French Intellectuals Against the Left). A vehment anti-communism runs through a number of thinkers in this period, and not only the easily derided Nouveaux Philosophes. Perry Anderson notes that in 1974 Lyotard "confided to startled friends in America that his Presidential choice was Giscard, since Mitterand relied on Communist support." (29)
Summing up Lyotard's later work Anderson notes the symmetrical parasitism between "libertarian theory" and the PCF:

"From the seventies onwards, so long as communism existed as an alternative to capitalism, the latter was a lesser evil - he could even sardonically celebrate it as, by contrast, a pleasurable order. Once the Soviet bloc had disintegrated, the hegemony of capital became less palatable." (35)

In the wake of capitalist triumph resistance was discovered, but only, as Anderson notes, in the melancholy figures of the reserve of the artist, childhood, and silence. (If you want another project the comparison here with Walter Benjamin would be worth exploring.)

The "exception", so I have been reliably informed is (oddly) Derrida - who, it seems, displayed qualified sympathy to the PCF. In the context of this rabid and excessive anti-communism this seems all the more interesting gesture. Of course I'm not re-valorising the PCF; widely and justifiably regarded as the most Stalinist of the European communist parties. Instead, I think more probing is required into forms of anti-Communism, and into the tendency to often regard France and French intellectuals as "naturally" left-wing.

Christofferson, Michael Scott (2004) French Intellectuals Against the Left: The Antitotalitarian Moment of the 1970s. Oxford and New York: Berghann Books.