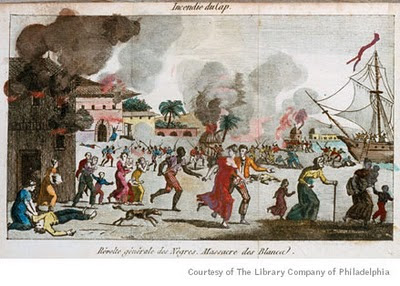 "The slaves destroyed tirelessly. Like the peasants in the Jacquerie or the Luddite wreckers, they were seeking their salvation in the most obvious way, the destruction of what they knew was the cause of their sufferings; and if they destroyed much it was because they had suffered much. They knew that as long as these plantations stood, their lot would do labour on them until they dropped. The only thing was to destroy them."
CLR James, The Black Jacobins (thanks to Jessica)
Negativity as a political practice, and thanks also to Jason Read for his excellent comments/review on my book. I have to say on D&G's Anti-Oedipus I'm picking up on a tendency in the book, which certainly doesn't exhaust the text. That said I don't find it personally that engaging, perhaps due to the reason Jason has identified in its 'productivism' versus representation matrix, although more obviously stylistically (for me).
In a general way the critical identifications in the book are noting commonalities and can't be exhaustive, but the chapters are designed at least to ground my arguments in the textual evidence (I can't stand arguments that fail to even read the texts they analyse and simply identify a thinker/writer by their pre-existent image, or create a 'straw-man' (it used to be 'postmodernists')). Part of the point is that each of the thinkers I analyse operates in a point of tension with negativity and, of course, my overall reading doesn't have to accepted but I would say I don't think this tension can be contested.
In some recent presentations of the book I've been a little ruder about the 'negativity of finitude' tendencies, but whether they will or deserve to see print I don't yet know.
Posted by Benjamin at 03:18

so are you for destrukion praxis or otherwise..? I can't quite tell.

well yes and no, partly for reconfiguring notions of 'destruction' away from the usual significations towards something more like the situ 'detournement'; can't say I blame people for destroying the means of production though