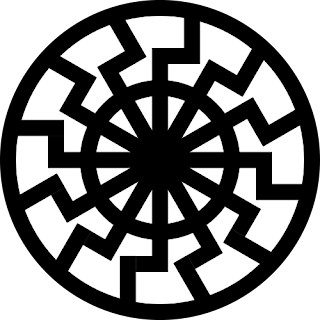 On May 1 1937 the first and only issue of Soleil Noir, a self-styled ‘post-Surrealist’ publication consisting only of one double-sided mimeographed page, was seized and destroyed by Parisian police on charges ‘obscenity’. The contents of the issue can only be reconstructed largely from a truncated description later found in the files of André Masson and brief (wholly negative) reports in other Surrealist publications.


What is evident is the disturbing content of the texts printed in the issue and especially of a hand-drawn illustration, which appears to have been drawn for each copy. Masson notes the similarity to his style, and is concerned it will be attributed to him, but unfortunately his description of the actual drawing is vague at best – speaking only of a ‘the blackened solar anus’, ‘a technique at once primitive and beyond anything of our time’, and that it ‘burns the eye’. In terms of the texts he, and others note, the extreme violence of the language, its agrammaticality, and a lengthy and scurrilous attack on Georges Bataille. The writer intimates that during his time at Quarr abbey, on the Isle of Wight, Bataille underwent a ‘failed’ initiation and, as a result, was ‘burned by the black sun’. In the most obscene terms Bataille is accused of fatally re-writing his ‘wound’ or ‘burn’ into a political and economic theory of prodigality and excess that has reversed the ‘anti-economy’ of the ‘black sun’ qua ‘extinction’. Again, the descriptions are imprecise and, surprisingly, no mention of the attack has been found in any of Bataille’s letters or papers.


Although the issue was anonymous references have been found that suggest attribution to a provincial ‘surrealist’ (never recognised by Breton), Gaston B. [unfortunately no surname is given or can be reliably reconstructed], supposedly incarcerated in a mental institution for several years in the mid-1930s before he found his way to Paris where he tried, and failed, to meet Artaud. Even more speculatively it is reputed that Gaston joined the Legion of French Volunteers Against Bolshevism, and was later to serve as ‘occult adviser’ to the SS Charlemagne Division, formed in 1944 out of the remnants of the LVF. It is claimed either that ‘Gaston’ was executed out-of-hand by a special Soviet partisan group in Pomerania in February 1945, that he committed suicide in Berlin on May 1 1945 after helping prevent the seizure of the Furher’s bunker on that day, or that he was shot when captured by Free French forces under the command of General Leclerc.
Posted by Benjamin at 07:26

Could you list, perhaps, the precise sources you've used to put this post together ? This seems fascinating and is tangentially related to some research I'm currently doing.

Thanks so much for bringing this to people's attention.

I'm afraid mainly from my mind - in terms that I wrote a lot on Bataille (my PhD and first book), plus wikipedia for the Charlamagne division (which I'd heard of before). Surya's biography of Bataille, especially the stuff on the 30s, is the best place to start.

If I may though, maybe the references are a bit too well-known (Breton, etc.). More obscure or outright fictitious name-dropping would add a touch of borgesian plausibility.

thanks, this was for a never to be achieved CoC game scenario. I think anything beyond that is beyond me...