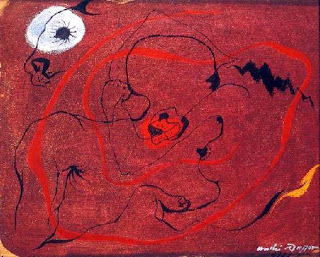 The intoxicated image of unwinding Ariadne's thread, which recurrs in the Hashish writings, suggests a 'productive' act that takes as its power not to unwind one thread as the line of progress, but to multiply and trace different 'threads' that need to be gathered together, or made citable, to resist being 'spatialised' as the line of progress. I think this may be another image of the variable production Benjamin invokes and which suggests another image of time as gathered threads.
It may also be linked to Kant's invocation of 'guiding threads'. Its probably an equally enigmatic image as the train, once we'd got through nearly all the permutations on that metaphor, but I think it suggests the kind of intoxicated self-extinguishing practice Andrew was invoking (against some more pious conceptions) and suggests another way of figuring 'spatialised time' on the grounds of that spatialisation (as with the Arcades project), but also against it.
Posted by Benjamin at 08:36

You've tugged on an interesting thread here. I think you have further support for your reading in Benjamin's Fuchs essay when he is addressing the surpassing of classicist artistic values:

"[I]t would be a mistake to assume that the idealist view of art was itself entirely unhinged. That cannot happen until the dialecta membra which idealism contains - as "historical representation' - on the one hand and "appreciation" on the other-are merged and thereby surpassed. This effort, however, is left to a mode of historical science which fashions its object not out of a tangle of mere facticities but out of the numbered group of threads representing the woof of a past fed into the warp of the present."

thanks for that, after tracking trains in Benjamin, now it's threads... but more seriously, I think there is something in the metaphor in untangaling/plaiting which might speak to those 'numbered threads' you note and a new practice that speaks to production and temporality.

I got my first electronic cigarette kit off of VaporFi, and I must admit that they have the best kits.