Our Friends in the North: Alex Niven's Folk Opposition

Alex Niven's Folk Opposition is a provocative, timely, and moving work. Provocative due to its unabashed endorsement and affirmation of 'folk' or regional identity against callous neoliberalism, timely due to the recent 'resonance' of populism in the US and elsewhere, and moving because if its recourse to sentiment and collectivity in an attempt to articulate  a new politics. As he puts it in his preface:

Even without taking into account the vast inequalities that exist on a global scale, it is clear that we are living in an age of profound anti-egalitarianism and loneliness. In our own country [the UK], there is an underworld of suffering lurking beneath a surface-world of consumerist fantasy and lifestyle myths. The essential assertion of the following essay is that the best way to counteract this climate of negativity and radical privacy is through a socialism that is founded in the extraordinary potential of the ordinary, the populist, the community level, the everyday, a socialism that derives its identity from the belief that we are better off in teams than we are as isolated individuals.

It also resonates oddly for me because while Alex Niven valorises the oppositional potentialities in North-East England, notably in the pairing of T. Dan Smith's problematic civic modernism and Basil Bunting's regional poetic modernism, I come from the 'negative' region - Essex. From Thatcherite shock-troopers to TOWIE, Essex is often tracked as the 'dark heart' of neoliberalism, coupled to the useful ability to condescend and project this onto a 'working class'/Eastend community (and creating a remarkable imaginary geography of 'Essex' in the process). Certainly Niven does not invoke this stereotype and it is one that could easily be disputed, but it offers a strange displaced place (now I live here), to reflect on critical regionalism. 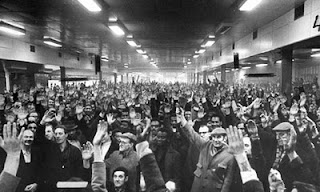 The problem that this book responds to, I think, is the one described by Theorie Communiste as the 'end of programmatism', that is the collapse, under the twin pressures of capitalist attack and workers' refusal, on the 'mediating' functions that affirmed workers' identity: unions, state-socialism, social democracy and the 'Fordist compact'.  While TC regard this 'cycle' of the affirmation of the proletariat as passed and now replaced by new forms of struggle that 'jump' to the immediacy of abolishing proletarian identity, Niven argues that we can re-affirm and reconstruct this 'affirmative' resistance through new populist articulations that draw on the remains and remnants of programmatism.

The appeal of this argument, including to myself, is that it seems to avoid the potential risk of merely ratifying defeat as the ground of new forms of struggle, and of the linked danger of simply dismissing the 'limits' of past forms of struggle. It also has the benefit of trying to work through the relation of the empirical working class to the idea of the proletariat (or other political form of left agency), while avoiding condescension and hostility to that actually-existing working class (a danger in certain forms of ultra-leftism pointed out by Alberto Toscano). Hence its relation to Owen Jones' Chavs, as both struggle against the toxic and vile discourse of hostility to working class people that permeates British society.

Its obvious difficulty is that these 'remnants' seem insufficient to galvanise a new politics, and might fall into the problematic forms of populism that Niven is careful to recognise and try to distinguish his work from. Also, TC-style arguments imply, correctly I think, that the narrowed past forms of class identity cannot respond or reply to the dispersion and mutation of 'proletarian' identity (or anti-identity). This could also be linked to the difficulties in characterising an 'elite', and the often-discussed problems of populism leading to political simplification. 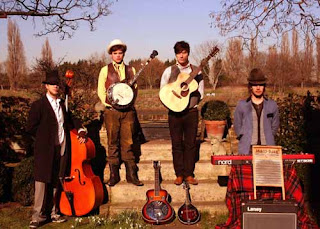 At a more local level I would also note that although the book analyses how Folk music, in the form on 'nu-folk', could be used to legitimate neo-liberalism there is less on the 'uses' of Folk music as oppositional resource. Although I myself only recently encountered this, and I'm no expert at all in Folk, we could consider the career of Hamish Henderson (described by Patrick Wright in the LRB - unfortunately in a subscribers only article). Communist militant, folk musician, and articulator of an explicitly Gramscian politics of the national-popular, this suggests precedents (and the problems they encountered) that could have been considered by Niven (or, as this is an essay, might be considered in a longer work).

In fact, this opens a more problematic history for this kind of articulation, vectored from Orwell's The Lion and the Unicorn to Billy Bragg's The Progressive Patriot, via the Left's attempt to wrest nationalism from Thatcherism in the work of Tom Nairn and others. This envy of the 'motivational power' of patriotism/nationalism (similar arguments exist around religious radicalism) is obviously risky, as the reclamation can lead easily to the 'affirmation' of national belonging and exclusivity, even if cast in terms of 'better' values. Niven's critical regionalism is, I think, very alive to this risk (largely through valorising a 'working-class modernism' that is both internationalist and regional), and as the case of Hamish Henderson demonstrates it is not impossible to combine defence of certian regional values and identities with communism (or left politics), without falling into nostalgia or exclusion.

We could also raise the question of the 'monumental positivity' of the English working-class pointed out by Perry Anderson in 1964, countering Hoggart and others. Again, the reflection on the relation of positivity to negativity in the formation and destruction of class identity might involve more consideration of the complex relation between these terms. In fact, the rush to negation might need to be reconsidered within and against and the dissolutive effects of capital, as much as the rush to affirmation.

Niven is careful in his attempt to avoid these traps, even if the discussion of alternative bases of 'affirmation' is (necessarily) fragmentary and tentative. That said, I think this book is essential to a debate and to thinking about the forms of socialism that are too-often immediately considered 'out-of-date' and, as Carl semi-mischieveously noted, form a counter-proposition to 'accelerationist' forms of thinking (left or right) which declare farewell to an idea that they often never had much time for.
Posted by Benjamin at 03:29