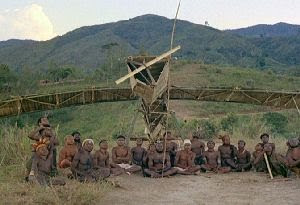 In lieu of what I had planned to do, which was actually post on Peter Worsley's The Trumpet Shall Sound (a reference gleaned from Alberto's book, and well worth tracking down, especially the 1970 Paladin edition with psychedelic cover I found in Hay-on-Wye), here is just a great quote and some scattered remarks:

For a long time, the Europeans were not regarded as all-powerful, but as rather pathetic, ignorant people who could be easily cheated or stolen from. Their ignorance of sorcery was lamentable. ‘These are not men, they are merely gods’ said the natives, judging the Whites to be beings whose lives were inferior to those of living men. Again, they spoke the indigenous tongues very badly; why should one bother trying to make out their uncouth speech? And if one did associate with them, was it not likely to provoke the wrath of the ancestral spirits? Surely the country of the White man must be a very bad place, or why would they leave it? Or were these, perhaps, refugees who had fled their country to escape some punishment? (218)
Worsley's book is concerned with cargo cults, and more particularly with seeing this messianic movements as actually pretty rational responses to the irrationality of capital, especially in colonial 'contact zones'. After all, if you work more and earn less, or if the colonialists seem to do no work and live pretty well, why not engage in some Maussian-messianic salvage punk by destroying all your goods and waiting for deliverance by the ships or planes of the whites? Kill all your pigs, the primary source of wealth in New Guinea, and await the great Pig. Worsley's point that 'rationality' in anthropology and sociology is often judged from the 'rationality' of the market is particularly astute, as are the colonised's remarks about how useless whites are because they keep having to send broken down vehicles back to the ancestors for repair. More disturbing, although perhaps accessible via Fanon, are the claims of the colonised to be the real ancestors, and really white. A great scene as well when one potential rebel leader is sent on a 'orientation'/ training course and finds out that the whites don't really believe in their God but instead claim descent from apes - well, as he notes, that was always our theory...
In fact bearing in mind the inexplicability of the financial crisis and its effects of 'creative destruction' / non-reproduction Worsley's book starts to look like a guide for strategy for the colonised of capitalism. Why not liquidate your property and await your rescue package? (Probably better to try this if you run a bank...)
Posted by Benjamin at 07:47

'Kill all your pigs.. and await the great Pig.'

'An ANGAU patrol into the largely uncontrolled region between Wabas and the Dutch border in 1946 found that people were killing off their pigs in anticipation of the imminent descent of 'Great Pigs' from the sky following three days of darkness.' (209)
I'm waiting myself