Here are some immediate responses to the excellent discussion of Nights of Labour of my work on the 'apocalyptic tone' (forthcoming soon on the Mute website).

1.0 In reply I can only agree about the disjunction between the crisis in neo-liberal govermentality and the articulation of the crisis of capitalism itself. There is no doubt that one element of the function of capitalism is its ability to engage and deploy different forms of govermentality, and so although this crisis in this particular 'financial regime' offers a certain alienation or de-familiarisation of capital 'on the ground' the usual 'abstract' mechanisms continue to operate precisely in the 'blind' Dawinian forms NOL identifies. It's worth noting, and this is a point made by Andre Pichot, that Darwin imported models from the social science of his time (Malthus and Smith especially) that emphasised the 'blind' functioning of 'chance' in the nascent field of the 'economic'. 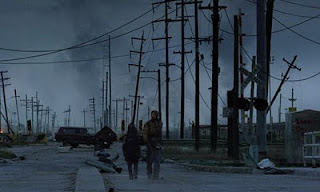 2.0 The very key question here is how 'dysfunction' or 'crisis' can also operate as a form of the reproduction of capital in the mode of non-reproduction - a point emphasised in the work of Benedict Seymour on New Orleans (and, now, its imaginary re-articulation). We cannot afford to assume the automatic rebound of capitalist crisis to 'us', but, as NOL points out, my own articulation of the tendency as possible mode of analysis is more in the form of critique than positive recommendation. Although the implication of my analysis is the need to articulate between real abstractions and change, to start to think together more closely, and more realistically, the subject of change and the object of change.
3.0 Certainly, as I argue in the Mute piece, the apocalypse offers modes of thinking radical re-orderings. In terms of strategy it cannot be dismissed out of hand, abut I don't see how many of its current forms truly articulating either the subject or object of change; although I have my queries Evan's project is the most thorough attempt to deal with this.
4.0 Fascinating is the suggestion of the articulation of apocalypse as missed, which transforms into the discourse of tragedy. I've recently read Althusser's essay on the Piccolo Teatro (in For Marx) where he articulates different experiential forms of temporality. We have the 'melodramatic time' of ideology - the time of the imaginary, and one which seems to resonate with the temporality of the current crisis. This time can make a transition to the temporality of tragedy, which appears to be the moment of decision / action, but there is also another form of time. This is an enigmatic, even non-subjective time, which figures the brute encounter with the 'real' of capitalism, its very absence of relations, and even the embrace of that real ('the true relationship is constituted precisely by the absence of relations.')
4.1 Althusser's example, from the play he analyses, is a daughter's embrace of prostitution as economic choice posed against her father's melodramatic and tragic decision to murder her potential pimp to defend her honour. As he states: 'Father, consciousness, dialectic, she throws them all overboard and crosses the threshold of the other world, as if to show that it is in this poor world that things are happening, that everything has already begun, not only its poverty, but also the derisory illusions of its consciousness.'
5.0 While this last form of time can seen to return to the dangers of disabused embrace of capital, another figuration of the apocalyptic tone, it could also figure a break from such a tone and into the strategic (we could connect this to Althusser's speculations on Machiavelli's notion of the conjunctural connection of fortuna and virtu, which passes itself in 'pure' a-subjective contingency). 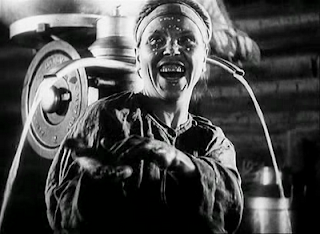 6.0 To turn to NOL's last point on the experience of collectivisation as apocalypse or even utopia I think this is best captured in the work of Platanov, notably The Foundation Pit. His work, which I can only recommend you read, captures in uncanny fashion these strange utopian / apocalyptic forms ('We will kill the universe with machines').
6.1 I certainly think then connection of ideas to popular forms of understanding is crucial. In one sense it is the crucial necessity in the attempt to articulate the current crisis in a different form. This is where I see Althusser's point as relevant - a fusion of reason and reality would involve rupture with the melodramatic/tragic into the 'real' of capital as the absence of such relations. Of course, as Althusser's own work suggests, this would still have to be articulated in the register of the imaginary and work-over or exceed any 'return' to the melodramatic/tragic - otherwise we risk an elitism of the disabused 'real'. This is Gramsci's point about the motivating power of Marxism qua the 'religion of the subaltern' - providential narrative of victory - and, we could say, the need to articulate 'profane' forms of Marxism in popular articulations.
7.0 It's here where NOL's work on the experiential consciousness of workers might do well to disrupt my 'dogmatic slumbers'. This was also the therapeutic work of Infinite's intervention at HM, which has prompted me to start to really think about an anthropology of the worker (not so much an ontology, although due to capital's own 'philosophical' functioning ontology is also crucial). This is for future work, but without either this, or a more strategic thinking of actual forms and structures of negativity / resistance my own forthcoming book risks being 'weightless'.
Posted by Benjamin at 02:56