[This is my presentation at the Future event with, as Owen noted, references and quotes - I stand attached to my academic transitional objects, which should come as a relief to all as you wouldn't like me if I improvised...] 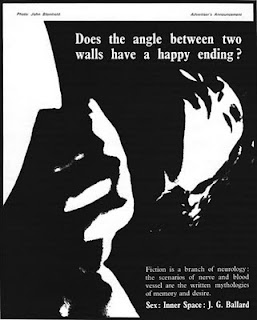 The image of the future which I have selected is one of the series of J. G. Ballard’s pseudo-advertisements that he published in Ambit no. 33 in 1967. Ballard explains that:

Back in the late 60s I produced a series of advertisements which I placed in various publications (Ambit, New Worlds, Ark and various continental alternative magazines), doing the art work myself and arranging for the blockmaking, and then delivering the block to the particular journal just as would a commercial advertiser. Of course I was advertising my own conceptual ideas, but I wanted to do so within the formal circumstances of classic commercial advertising – I wanted ads that would look in place in Vogue, Paris Match, Newsweek, etc. To maintain the integrity of the project I paid the commercial rate for the page, even in the case of Ambit of which I was and still am prose editor. I would have liked to have branched out into Vogue and Newsweek, but cost alone stopped me ... (R/S 147). 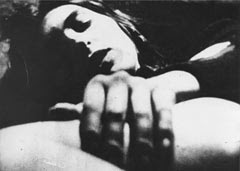 The reason for my fascination with this image as an image of the future, which is in fact over forty years old, is that it represents the deliberate attempt to construct an image of the future that can resist the obsolescence of the future. This might seem an ironic proposition when we consider the fact that this image was created in the mid-60s – a time when, as Ballard retrospectively notes, ‘people … were intensely interested in the future’ (1994). Yet, he also notes that ‘[s]adly, at some point in the 1960s our sense of the future seemed to atrophy and die’ and that, by the 70s, only ‘a few romantics like myself still believe[d] that our sense of the future remain[ed] intact’ (1994). In fact, the atrophy of the future took place because of the impoverishment of our images of the future. The possibility of the future became blocked by those images of the future that seemed to attest to faith in a better tomorrow: the space race, two years away from the moon landing, pop futurism, the consumption-driven Keynesian compact, ‘the dreams that money can buy’, ‘advertising and pseudoevents’ (R/S 96). These images of a promised land of ‘outer space and the far future’ (R/S 97) had been predicted and generated by the science fiction of the 1950s. Locating himself as a science-fiction writer Ballard recognised the exhaustion of this tradition in its realisation: ‘by an ironic paradox, modern science fiction became the first casualty of the changing world it anticipated and helped to create.’ (R/S 97) 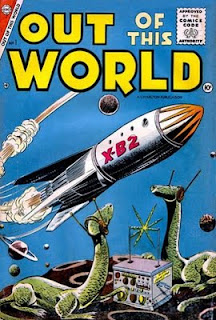 Ballard’s image is a counter-image to this atrophy and impoverishment of the future. It is a ‘chromosome of the future’ designed to ‘divide and grow in the reader’s mind’ (Ballard 1994). We can understand it as belonging to that conceptual Third World War Ballard would later invoke in The Atrocity Exhibition: ‘The blitzkriegs will be fought out on the spinal battlefields, in terms of the postures we assume, of our traumas mimetized in the angle of a wall or balcony.’ (AE 11) With the threat that ‘the future is ceasing to exist, devoured by the all-voracious present’ (R/S 97), the counter-image tries to extract a new future; the obsolete science-fiction of outer space has to give way to the new science-fiction of inner space. Reviewing Hitler’s Mein Kampf in 1969 Ballard remarks ‘[t]he psychopath never dates’ and speculates that: ‘perhaps one reason why the American and Russian space programs have failed to catch our imaginations is that this quality of explicit psychopathology is missing.’ (R/S 104) In response conventional science-fiction can only ratify its own transition to archaism, by producing images of the future that are ‘a kind of historical romance in reverse, a sealed world into which the hard light of contemporary reality was never really allowed to penetrate.’ (R/S 97) (Ballard’s reference is 2001, but I also think of Star Wars). 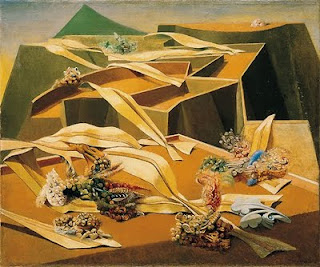 The colonisation of reality by fictions requires a dialectic of involution and externalisation. We turn inward to the body and the psyche – fiction is a branch of neurology – as ‘the one small node of reality left to us is inside our own heads.’ (R/S 98) And yet that inner reality has been turned inside-out, as our innermost desires are always-already realised by science, pornography, and advertising. For Ballard the usual elements of the so-called ‘human condition’ – sex and death – are the first casualties of this war. Instead of de-conceptualising them, to recover their ‘natural’ form, à la Reich or Marcuse, we must take them as manipulable elements ‘of a wholly conceptual character’ (AT 80). The ‘node of reality’ is not even some residual or surplus (Lacanian) capital ‘R’ Real, which could resist the totalising forces of mediatisation. Instead, ‘We’re living in an abstracted world, where there aren’t any values, where rather than fall back, one has to, as Conrad said, immerse oneself in the most destructive element, and swim.’ (R/S 161)

To wage this Third World (Image) War we have to move deeper into our own psychoses (AT 9) – to immerse ourselves in the image-stream to wrest the future from the perpetual present by an ‘elective psychopathy’ (Ballard 2008). The subsumption of the psyche makes it available for further re-conceptualisation, for the invention of new pathologies and new perversions. Ballard’s image is a radicalisation of the fact ‘that sex is becoming more and more a conceptual act, an intellectualization divorced from affect and physiology alike’ (AT 56). We can imagine it as the creation of one of the psychiatric patients in The Atrocity Exhibition, the future image guerrillas of this Third World War: ‘these bizarre images, with their fusion of Eniwetok and Luna Park, Freud and Elizabeth Taylor’ (AT 7). The involution to inner space, to scenarios of nerve and blood vessel, forms an alternative ‘conceptualized psychopathology’ (AT 99) of re-externalisation. 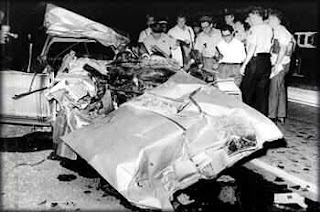 The ‘future’ is now an image concocted from the iconography of the mediatised unconscious, in which Jung’s archetypes and Freud’s drives are re-figured in ‘the nasal prepuce of L.B.J., crashed helicopters, the pudenda of Ralph Nader, Eichmann in drag, the climax of a New York happening: a dead child.’ (AT 20) The result is that these images become reversible; as one character ponders in The Atrocity Exhibition: ‘Are space vehicles merely overgrown V-2s, or are they Jung’s symbols of redemption, ciphers is some futuristic myth?’ (AT 84) Instead of merely being quaint and anachronistic technologies harnessed to an anodyne future, we can re-conceptualise and re-pathologise space vehicles. The science-fiction writer creates a new ‘predictive mytholog[y]’ (R/S 42): myths of the future that are also performative acts to create and construct that future. 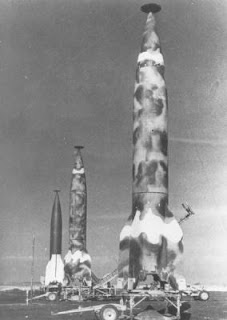 Through the choice of psychopathology as a conscious act we can shape new written mythologies of memory and desire. The images of the ‘future’ that previously closed-out the future can now become the material for mythologies of a truly new future. Of course, the problem of such a mythology is that the more successful it is the more it is absorbed by the very mediascape it mimetizes. As Ballard writes ‘A lot of my prophecies about the alienated society are going to come true’ (R/S 155), however, if they come true, then they become superfluous. In The Atrocity Exhibition a ‘Festival of Atrocity Films’ is put on in a venue presumably very much like this one: ‘the results were disappointing; whatever Talbot had hoped for had clearly not materialized. The violence was little more than a sophisticated entertainment. One day he would carry out of Marxist analysis of this lumpen intelligentsia.’ (AT 19) Leaving aside the interesting question of what that analysis might be, and its relevance today, Ballard presciently probes the neuralgic point of his own fiction. The coinage ‘Ballardian’ is the very sign of this ironic success, as Ballard’s own fiction succumbs to the fate he had sketched for the science-fiction of the 1950s: ‘bec[oming] the first casualty of the changing world it anticipated and helped to create’.

It appears that the angle between two walls does not have a happy ending. Ballard’s own creation of himself as a brand or concept becomes another image in the media stream. This, however, is the essential risk of Ballard’s own active nihilism, which accepts that abstraction and conceptualisation operate all the way down: there is no point of immunity or safety from which one might safely create a ‘pure’ image of the future. His images of the future are always, explicitly, transitory, with ‘in-built-obsolescence’. In response we could extrapolate two possible positions from Ballard’s work. The first is that of a quasi-Weberian re-enchantment of a denuded reality through re-conceptualisation. In The Atrocity Exhibition the character Travers ‘has composed a series of new sexual deviations, of a wholly conceptual character, in an attempt to surmount this death of affect’ (AE 80) We could also cite Ballard’s retrospective tendency to position The Atrocity Exhibition as a work of moral commentary. We fall back from the future into a kind of Swiftean satire, at once reactionary and conservative.

The second position is something like what Nietzsche calls ‘completed nihilism’: the traversal and transcendence of the nihilism Ballard anatomises. In this case, Ballard’s dialectic proceeds by the ‘bad side’: the worse the better. He remarked in a 2006 interview that: ‘I’m somebody who stands by the side of the road with a sign saying, Dangerous Bends Ahead – Slow Down.’ He pauses. ‘Although it is true that I sometimes seem to be saying Dangerous Bends Ahead – Speed Up.’ (in Brown, 2006: 20) That speeding up, this accelerationism, of course risks passing from an active nihilism to a mere passive nihilism: the embrace of what is, and the closure of any possibility of the future, or the courting of a deliberate cynicism that re-converges with the position of the moral critic as disgusted and disenchanted observer.

This unease or instability is I want to suggest the reason why Ballard’s image of the future is so resonant. This image, of course, appears as a very 60s image, imbued with the kind of deliberately perverse utopianism that no longer registers with us except in the forms of nostalgia or cynicism. The difference is that this image disjoints itself from that moment by its prescient refusal of the usual models of repression, liberation, and recuperation. In The Atrocity Exhibition Ballard notes that images of elective psychopathy, in which Vietnam combat films are shown with a muzak soundtrack, create an environment ‘in which work-tasks, social relationships and overall motivation reached sustained levels of excellence’ (AT 94). The release of repressed desires can be made to serve the logic of the ‘perpetual present’ of accumulation. This is the mechanism of ‘repressive desublimation’, sketched by Marcuse, in which our desires are ‘liberated’ as the ‘dreams that money can buy’. In response the writer can only immerse themselves and swim, by imagining ‘an optimum torture and execution sequence’ (AE 93). This image fascinates me as an image of the future because it embraces fully the saturation of the future by abstraction and the only remaining possibility being further abstraction. For all its kitsch retro-sixties styling the encrypted moment of resistance figured in this image is the embrace of a future that never really took place, in which the only form of a future we can construct is one that takes place through absolute abstraction.

Who says progress is dead?

We need to talk some Ballard when I arrive for the conference... the late great makes a pretty central appearance in the last chapter of my apocalypse book, and I'd like your take on it.