Lunatics Have Taken Over the Asylum 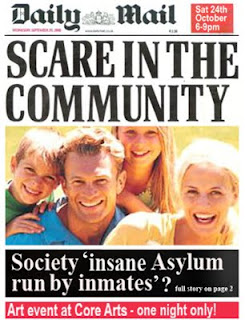 A one night art event at Core Arts in Homerton showcasing video, performance, 2D and 3D works by artists addressing issues relating to community care and institutional critique both inside and outside the context of art.

‘Society is an insane asylum run by the inmates’, Goffman, E. (1961) Asylums
The theme of the show resonates with current tendencies to prioritise principles of care in the community over extended hospitalisation. The idea of the mentally ill being free to roam the streets and mingle with the general public has caused much fear amongst communities and frequently leads to sensationalist news headlines in the tabloids such as "Armed and dangerous: public at risk as mental patients escape the care net." (Sunday Express, 2006).
On the other hand, the art world has shown a revived interest in the ‘outsider’ artist. The fantasy of the ‘outsider ‘ who, ignored by society, obsessively practices his ‘authentic’ and untrained creativity has lead to exhibitions such as Inner Worlds Outside at the Whitechapel Gallery (2006). While giving artistic credibility to the work of self-taught artists by exhibiting it next to the work of established artists, such exhibitions do not challenge the authority of the art institution to select who is ‘in’ and who is ‘out’.
Scare in the Community aims to confront both sides of the coin by showing art, which relates to ideas of institutional ennui and social norms alongside work that responds directly to the implications of the closure of asylums over the past decades.

Scare in the Community is curated by Julika Gittner and Jon Purnell.
Posted by Benjamin at 02:28