Destroy what destroys you! 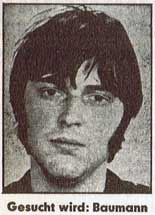 Charmingly, and keeping within the doxa on the 1960s, Michael ‘Bommi’ Baumann claims he cannot remember if he coined the slogan ‘Destroy what destroys you!’ or not. After repression, the experience of defeat, historical amnesia and retrospective vituperation (including the ‘revelation’ that Baumann was a Stasi informer), Baumman’s 1975 book Wie alles anfing [How it all Began] – Terror or Love? In English (1979) is a rare internal unapologetic autocritique of this cycle of struggle (‘adventurist’, ‘terrorist’, or ‘urban guerilla’, according to political taste).

The book charts Baumann’s political evolution from the refusal of his proletarian position, his time as a counter-cultural dropout in the ‘Roaming Hash Rebels’, and the development towards armed struggle via Tupamaros West Berlin to the Movement of the 2nd June [M2J] (named after the date on which, in 1967, the student Benno Ohnesorg was shot and killed during a demonstration in Berlin against the Shah of Iran).

The antinomian cultural milieu is charted as a strange cocktail of the beats, Maoism, Guevarism, drugs, anarchism, and even Satanism:

People like Proudhon, the old anarchists, often were also Satanists at the same time; Bakunin too. God and the State is actually in some ways a Gnostic piece. It has religious content when he says that once we take the Bible seriously, we can only say at the end, ‘Hail Satan.’ That story fascinated us.

Unfortunately what is absent is any sense of a link to a German musical counterculture, with Baumann’s references entirely American.

The M2J was the most libertarian / anarchist of the armed groups and, Baumann claims, it more proletarian composition produced a contrasting attitude to violence to that of what he regards as the ‘abstract’ and student-based Rote Armee Fraktion (RAF): 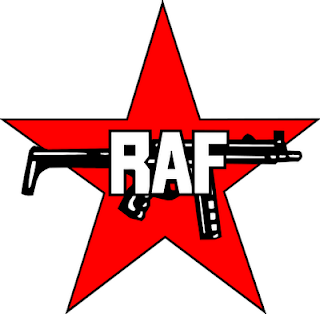 We’d lived with violence from the time we were children; it has material roots. On payday, when the old man comes home drunk and beats up the old lady – it’s all that stuff. At school, you get into scrapes, you have to make your way with fists, for you that’s a perfectly normal thing; you have to fight at your workplace, you fight in bars, you have a more healthy relationship to it. For you, violence is a completely spontaneous thing that you can unroll quite easily. There was always this split between the R.A.F. and ourselves, in the source of violence, where it was coming from.

For Baumann M2J’s amateurism was both its weakness and strength, making it vulnerable but also avoiding the professionalization of struggle that created new apprentices’ of revolution.

In fact the link Baumann draws between his refusal of apprentice work on building sites and then the tendency to re-compose 'apprentice structures' in the radical groups is one of the most useful points of criticism concerning this form of struggle. As he notes this drive to performance involved also over-concession to the function of the media and a machismo of struggle: ‘Only rigid continuation, total pressure to achieve, and it keeps going, always gets worse, until at some point, some guy collapses – he just can’t go along with it anymore, he can’t do it.’ (this might also stand as a reflection on Baumann's own 'informing' - along with a number of sections of the book on inflitrators and those who abandoned the armed struggle and/or informed).

Linked to this conception is Baumann’s reflection on the position of M2J, which appears very different from what one might take from their actions:

The June 2nd group had a theoretical base similar to ‘Gauche Prolétarienne’ in France, or ‘Lotta Continua’ in Italy – that is, to give a militant solution to work conflicts in the factories. When the people in the factories are falling over from the bad air, then the owner’s villa must be put on fire, to show the people you can defend yourself if you attack the guy directly.
One of the ‘forgotten’ facts of the 70s cycle of armed struggle is how often it emerged from counter-violence in the workplace, also the case of the Red Brigades, before becoming more spectacular and separated from any proletarian milieu.

To be more precise the nature of this workplace violence has been forgotten; not only the various forms of alienation but also the ‘direct’ violence of the factory police, often coupled to union resistance to any radicalisation (including physical resistance). In the case of GP their strategy was to compose a new autonomous workers’ movement uniting ‘the anti-authoritarian aspirations as they were expressed and continue to be expressed by youth and the new forms of battle in the working class, anti-despotic forms of battle.’ These anti-despotic forms included plant occupations, hostage taking of senior managers, resisting the CRS, and workplace sabotage. This struggle intensified with the call, in 1969, for ‘the non-armed but violent revolt of the partisans’ (referring back to the partisan activity of the French resistance as much as to Maoist strategies) and for militants to ‘lead the resistance, to lead the violent struggle’. Blow for Blow was the line, and the struggle intensified to the point of the killing of GP militant Pierre Overney in 1972 by a Renault plant security policeman Jean-Antoine Tramoni.

Of course GP did not make the escalation into ‘terrorism’ or armed struggle, although the killer of Pierre Overney was himself killed in a commando ‘action’. A former editor of their paper La Cause du Peuple, Jean-Pierre Le Dantec later reflected that the strategies of GP had an unfortunate influence on German and Italian groups in their turn to armed struggle (he also criticised the killing of Tramoni). What seems to be the missing link in Baumann’s account is the collapse of this link to workplace struggles, although a similar dynamic developed with the Red Brigades. We see a locked spiral of escalation, illegalisation, mediatisation, and alienation of struggle. Baumann himself proves the best critique of this departure from any grounding milieu and the strange transformation of the urban guerilla into a figure dressed like a young executive, robbing banks, and developing new technical skills.

What ‘terrorism’ constructed then, in this spiral of complicity pointed out by Debord,[1] was the occlusion of this ‘mass’ dimension of violent struggle. One of the valid points made in Hari Kunzru’s My Revolutions (2007) is the widespread nature of acts of violence never reported and never claimed. [2] In the Italian context the concept arose of ‘counter-power in the pocket’ of ‘my comrade the P 38’ (giving an unlikely link to the debates about Spinozan ‘potential’). Here the use of the weapon was posed as self-defence within the context of the demonstration or action. Of course, both forms of action collapsed under militarised repression. Instead of ‘One, Two, Three, Many Vietnams’ it became a matter, as one Italian radical put it, of ‘One, Two, Three, Many New Yorks’: the counter-attack of not only direct repression but also fiscal capitalism (passing now under the name of neo-liberalism) that dislocated the forms of mass agency that supplied some minimal consistency to the violent (if not always armed) struggle.

All the confusions of Baumann’s memoir can perhaps be summed up in this lapidary reflection: ‘Stalin was actually a type like us: he made it, one of the few who made it. But then it got heavy.’

Notes
[1] ‘Quite to the contrary, it is because a large number of Italian workers have escaped being enrolled by the Stalinist trade union police that the "Red Brigade," whose illogical and blind terrorism could only embarrass them, was set in motion, and that the mass media seized the opportunity to recognize in the "brigade" their advanced detachment of troops and their disquieting leaders beyond the shadow of a doubt.’
[2] The major historical problem with the novel, leaving aside various flaws or problems in its formal construction, is the running together of the history of the Angry Brigade with that of the R.A.F.
Posted by Benjamin at 02:37