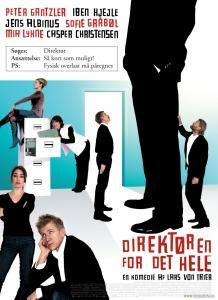 I once envisaged this blog containing a series of sub-Žižekian ponderings of various films / books / comics / music; only I haven't seen / read / listened to anything worth commenting on until now.
Thanks to the Institute and IT we've now seen Lars Von Trier's The Boss of it All (2006), which my partner described as "Brecht meets Shakespeare". Now LVT attracts Lacanians like flies to the poverbial, and I have no knowledge of whether he reads Lacan, but this film perfectly illustrates the Lacanian semblant / everything Žižek writes on the symbolic mandate, truth in the structure of fiction, "there is no Other of the Other", etc. The film concerns a company "owner" who has exploited and manipulated his co-workers by inventing a fictional "boss of it all" to take responsibility for any difficult decisions. Unfortunately to complete his final betrayal by selling the company without recompensing his colleagues he needs the "boss of it all" to sign the contract and so signs up an avant-garde actor to play the role.

Commentary is superfluous in one sense because of the brilliance of the film's logical probing of all the consequences of this act (as well as the fact LVT supplies his own commentary on the form of comedy, somewhat like his closing monologues in The Kingdom). Particularly acute is the moment when the actor playing the "boss of it all" invents the "boss of the boss of it all" to displace all the anger he has been receiving and outwit the company "owner". Unlike the melodramatic aspects of other LVT films, which I have often really disliked, the use of comedy makes for something that I find far more effective and troubling than they more overtly disturbing elements of Dogville or Manderlay (both of which I found properly penitential viewing). I wonder whether it will attract the same level of critical attention as those films? Despite all the various assaults and revisions of the canon in Eng. Lit. it is noticeable that comedy is still a rather "minor" part (with the obvious exceptions).
In light of my project critiquing the "affirmationist consensus" the scenes where the actor playing the boss of it all is advised to say yes to everything and has hot office sex because this involves simply consenting to a series of fantasmatic projections is genius.
Posted by Benjamin at 03:08

I have to say that the "There is no Other of the Other" as a teaspoon of medicine works quite well, helping one see the nature of any manifestation of The Great Oz, but when you realize that the suture of the Other of the Other is a necessary fold in social bondings, the full weight of this critique becomes difficult to balance. "Meet the New Boss..."

What worries me is that such King-stripping contains its own satisfactions, its own perverse little joy of "ah ha!" or "gotcha!" which is one of the immense pleasures of reading Zizek as he performs his psychoanalytic Judo again again and again like a sociological master. We see the flips, but what about his ground-game, who is going to tap-out from an ideological arm-bar? And what of his stand-up?

Don't get me wrong, Zizek is a sheer pleasure for the contemplating, but I think I can sense what makes him perpetually disappointed with his followers (without analyzing him). There is indeed the pleasure of interpretation, which makes his readings of films most satisfying, setting the battlefield upon every aesthetic surface. This is a good thing. But it seems that Zizek feels a vital connection to his conclusions, his opera, that has an immediacy that others simply cannot match.

This makes me feel that the path to genuine revolution, even that advocated by Zizek, is of the microscopic kind, the affective body-building of organizing powers which do not benefit so much from the Oz-defying adage "There is no Other of the Other" or even more enjoyably, "(M)Other". One wonders if the phenomena of Zizek itself is best understood within a communitarian sense of constructive values, rather than the ultimate satisfaction of interpretive revelations.