In lieu of meeting the stringent meme criteria here's a delaying tactic: please suggest possible image(s) for the cover of my new book. I'm still writing (one chapter and a conclusion to go; plus a series of traumatic rewrites no doubt - due December 2009 / published 2010), and the publishers haven't said anything about what might be acceptable so I make no guarantees. Also the Spinal Tap gag about black letters on a black cover is unacceptable... Anything good / helpful will get some reward (did I tell you about the piles of books making my office uninhabitable?).

Here are my thoughts (so far): 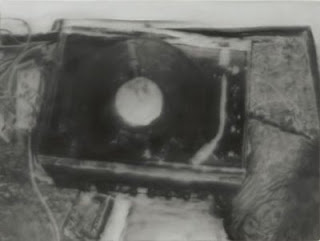 Gerhard Richter's "Record Player" (1988) from the Baader-Meinhof series. The other images in the series seem too obvious (and my book doesn't of course mention the RAF). Nothing also about music in the book either, but there is something that seems to evoke non-dialectical negativity in this image (for me). As I've been told (via a reliable source) publishers believe that a UK audience doesn't need a cover that has anything to do with the contents of the book, so anything goes. 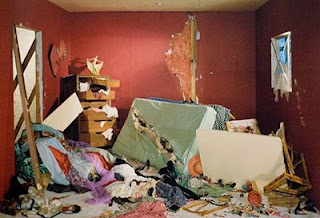 Jeff Wall "View from an Apartment" (2005)
I also like this, for no very obvious reason except perhaps I'm currently using a postcard of it as a bookmark. There's also something about the density of everyday life that seems to echo what I'm trying to think about dissolving.

This (or other images), from Masataka Nakano's "Tokyo Nobody" (something nicely apocalyptic about his work, and the book is amazing.

On the "long list" there's Titian's "Flaying of Marsyas" (1570-76) (too pretentious?) and I really love Caravaggio, but then nothing seems suitable. I'm starting to wish I was clever / famous enough to have one of those annoying openings when an artwork allegorises the project as a whole (Cf Foucault's The Order of Things, and the descent into stylistic tic in new historicism); I'm not.

Wall's 'The Destroyed Room' was used by Sonic Youth for their album of the same name a couple of years back. I don't know whether this disqualifies it.

I would suggest a black and white photograph, shot from behind the heads of the audience, of you lecturing, with the pupils of your eyes Photoshopped into minus signs.

John is so right.

John beat me to the punch about "The Destroyed Room," but I'll second IT's endorsement of his idea.

Though, of the options on hand, I'd go for one of the Tokyo-void photos by Nakano (though this may be biased by nostalgia on my part).

damn sonic youth - puts Raymond Pettibon out as well. If John's idea didn't involve a photograph of me I'd be happier. Perhaps my eyes could be made into Saul Bass-esq swirls.
I'd be grateful for more suggestions, outside of my own initial attempts...

how abt steven parrino:
http://www.gagosian.com/artists/steven-parrino

or a multi-slashed lucio fontana...

I love Goya's "The Dog" - a painting about the negative if ever there was one - but I might recommend Caravaggio's "Judith Beheading Holofernes," which has the virtues of being a) Caravaggio, and b) a tale of sneaking inside the enemy's sanctuary by way of cunning to take apart the body of the enemy - negative theory's project in a nutshell!