Some kind suggestions for the cover. The first two from espacioprovisional; I'm quite taken with the Christopher Wool image - the 'gridding' coupled to the 'splashed'/'smeared' paint (look I am not TJ Clark...) seems to resonate. 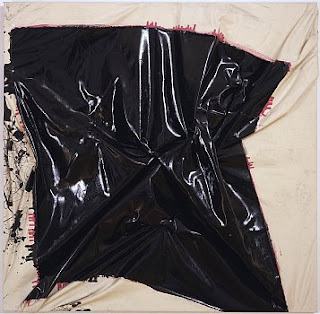 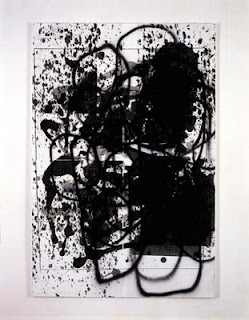 Christopher Wool, Untitled (2005)
The second nicely classical suggestions from Dave. I did think about Goya, but all the usual 'horror' images; my partner would like this, and I find it disarmingly cute. The Caravaggio is typically great, but I've got the feeling already "taken" by some other book (frustratingly I can't remember which). 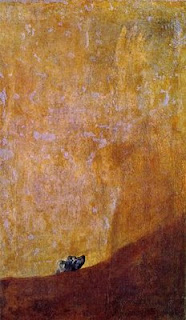 If either of you want a "prize" from the stash of books let me know. More suggestions gratefully received. My first book had a very poor picture of Bataille (going cheap though) for the cover, when if I had the sense I should have suggested a still of him as a seminarian from Day in the Country. The second had a rather nice cover but was written under such horrible circumstances that I can't recover any real affection for it.
Perhaps there is also a case for suggesting better alternative book covers for existing works? Considering the state of my thinking at the moment this may well make up future posts in lieu of more intellectual labour...
Posted by Benjamin at 02:56

If you are considering Caravaggio beheading pictures, then might I suggest that the St John the Baptist one is excellent, especially as Caravaggio signs his name in the blood!

i got my prize already in the form of a booklet on "the Weird" I recently found in my mailbox.

sorry not to recognise you; thanks for the suggestions greatly appreciated