Fundamentally, my position comes down to the nonadmission of chaos as the ultimate referential figure of the universe.
Alain Badiou (“Matters of Appearance” 322)

The Lovecraft event is the result of a singular knotting of art, science, and politics that produces a new materialist fiction of chaos. Lovecraft writes:

The time has come when the normal revolt against time, space and matter must assume a form not overtly incompatible with what is known of reality – when it must be ratified by images forming supplements rather than contradictions of the visible and mensurable universe. And what, if not a form of non-supernatural cosmic art, is to pacify this sense of revolt – as well as to gratify the cognate sense of curiosity? (Lovecraft xvi)

Abandoning a semi-mystical discourse of contradiction, which would oppose another “weird” world to this one, Lovecraft insists on the supplemental and non-supernatural form of his art. These supplements do not contradict the laws of the known universe but they suspend them to re-inscribe chaos within law (prefiguring the work of Quentin Meillassoux).
To achieve this suspension of the law Lovecraft forces a pass through the avant-gardes of his time, in both art and science. The key text in which Lovecraft provides a kind of “manifesto” of this forcing is “The Call of Cthulhu” (1928). This point arrives reaches saturation in Lovecraft’s description of Cthulhu’s “home” – the ancient and alien city of R’lyeh:

Without knowing what futurism is like, Johansen achieved something very close to it when he spoke of the city; for instead of describing any definite structure or building, he dwells only on broad impressions of vast angles and stone surfaces – surfaces too great to belong to any thing right or proper for this earth, and impious with horrible images and hieroglyphs. I mention this talk about angles because it suggests something Wilcox had told me of his awful dreams. He has said that the geometry of the dream-place he saw was abnormal, non-Euclidean, and loathsomely redolent of spheres and dimensions apart from ours. (Lovecraft 165-6)

What we find here is the precise combination of avant-garde art (futurism) with avant-garde mathematics (non-Euclidean) as the resources for the figuration of horror.
In the case of Futurism Lovecraft could not be further from the Italian Futurists enthusiastic endorsement of the new machine age and longing for a new type of “biomechanical man,” which can be found in a work like that of the second-generation Futurist Tullio Crali’s “Nose Dive on the City” (1939). While Lovecraft does not share this machine aesthetic he does share the Futurists’ anti-humanism and materialism. This link is most evident in the Futurists’ more cubist fragmentation of the body, such as in Severini’s self-portrait of 1912. 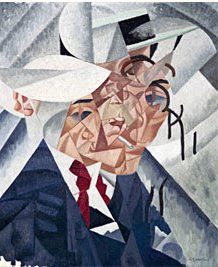 In this image the figure of the face and body is broken down into multiple perceptual planes that disrupt the coherence of the face in particular – exploding it. This rupturing or expansion of human perception is typical of Lovecraft’s own references to alien realms “crowded with indescribably angled masses of alien-hued substance” and composed of “clusters of cubes and planes” (“Dreams” 118).
This gesture of fragmentation is reinforced by Lovecraft’s reference to the non-Euclidean geometries discovered by Gauss, Lobatchevsky, and Bolyai in the 19th Century. In the words of the historian of mathematics Morris Kline: “[i]t is fair to say that no more cataclysmic event has ever taken place in the history of thought” (Kline 478). This cataclysm is the result of severing the link, supposed by Kant for example, between Euclidean geometry and the actual geometry of the physical world. The fact that non-Euclidean geometries could be valid descriptions of physical space forced the slow recognition that Euclidean geometry was simply a system of thought, different from physical space. This also problematised the accepted truth status of Euclid’s axioms; these axioms were “true” but they were not the fundamental or absolute truth of the physical universe. Lovecraft would exploit this “cataclysm” in the cause of horror – with the non-Euclidean as “abnormal”: while the accepted truth of Euclidean geometry is that the sum of the angles of any triangle always equals 180°, for the non-Euclidean geometry of Bolyai and Lobatchevsky this sum is always less than 180° and for Riemann’s geometry always greater than 180°.
In “The Dreams in the Witch-House” (1933) Lovecraft actually cast a student mathematician named Gilman as his unlikely hero. With amusing understatement the story states:

Possibly Gilman ought not to have studied so hard. Non-Euclidean calculus and quantum physics are enough to stretch any brain; and when one mixes them with folklore and tries to trace a strange background of multi-dimensional reality behind the ghoulish hints of the Gothic tales and the wild whispers of the chimney-corner, one can hardly expect to be wholly free from mental tension.
(“Dreams” 113-114)

Quite so. This quotation shows how Lovecraft integrates science with horror to demonstrate that his horrors have a scientific basis, with occult texts providing “terrible hints” (“Dreams” 114) of the new quantum order of reality – in the “suspension” of physical “laws” (at least in the mechanistic form of Lovecraft’s own materialism).