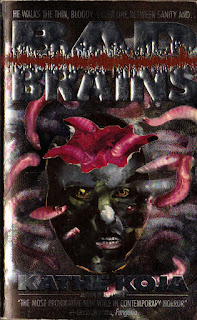 Predating the emergence of the neuronovel by about 5 years Kathe Koja's Bad Brains (1992) could be regarded as a prefigurative critique of that particular micro-genre. Replacing the spectacular and rare disorders so beloved of literary fiction Koja settles for a fall off a curb and resulting brain damage and repeating seizures for her central character - failed artist Austen Bandy. The banality of the initial incident coupled to the lengthy exploration of largely ineffective treatment, combined with rapidly dwindling health insurance, puts paid to some of the irritating troping of neurological 'insight' and 'difference' in the neuronovel.


Of course, we might say that the rise of the neuronovel is not so much a sign of the turn to the brain and bodies, although it is that, but a particularly literalised version of the postmodern condition as the fragmentation of the psyche (Jameson). Where once we were content with figurative mental illness now the only Real deal is the trauma in the Real, which (as Zizek has often noted) neglects the Real of appearance for an ideological version of the 'concrete' qua hardwired brain (hard being the operative signifier).

Koja's novel certainly does return to the troping of creation - what makes this a horror novel is Austen's deepening vision of 'a dustdevil of fluid, liquid, mucus; silver, almost scalelike, delicate as fish skin and stretching out, elongating'. If we can rely on this most unreliable of narrators then it's reported that this 'silver mucus' is spreading into Austen's own work, hence its appearance in the 'Real'. It is also coordinated with his previous divorce and his desire for his ex-wife Emily.

As the novel unfolds (slowly), we are in the territory of the activity of artistic creation. This is made explicit in the closing section of the novel with 'Dr Quiet', a Cronenbergian psychiatrist, who links this 'vision' to limbic excess and the act of creation, with the 'silver' as daemon of creation. The 'era of blood' is coded as absolute sacrifice, or the malign greediness and egocentrism of 'the heedless bodiless passion of creation itself where nothing matters, nothing exists but the work.'

Something, however, remains of the banality of this stepping over. Austen, headed out on an ill-advised road trip to visit his mother, encounters a punk band in the usual shock style. He wryly remarks: 'they were young and earnest and so unaware of edges, the real edges on which we teeter, every day'.

The real edges, or for a flip Lacanian reversal, the edges of the real are as much divorce, falling off curbs, running out of health insurance, and failed mothers as they are edged silver smears that may, or may not, be the sign of 'creativity' - or perhaps, both at once.
Posted by Benjamin at 06:42