Kathe Koja's 1993 novel Skin is a novel of transgression and its usual destination: death. It concerns two symmetrical artists: Tess Bajac (the narrative voice), who works with metal to make it live, and Bibi Bloss, a dancer who makes to transform the flesh through integration with metal. These symmetries, as Tess and Bibi, pass from comrades to friends to lovers to enemies to final collapse, trace a narrative of 'transgressive/alternative' culture. Tess's work in the novel is obviously modelled on Survival Research Laboratories (referenced in the text), and in her later departure from public art her 'boxes' are obviously Joseph Cornell's (a favourite model, it seems, for fictional artists). Bibi, on the other hand, is the 'modern primitive' of Re/Search fame, with her extreme body modification and, implied in the novel, quasi-Facist tendencies. 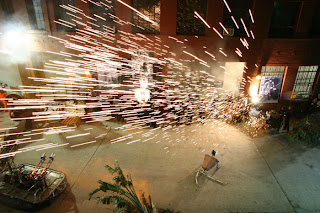 While the account of the art created is, typically in a novel, not every convincing in terms of the effects it is supposed to be producing, the account of the 'hectoring of limits' engaged in by the transgressive artist, especially Bibi is - as critique. What's also interesting is he emergent narrative in the book of the function of the manipulative character Michael Hispard who, in a sense, runs the whole show by playing off Tess and Bibi against each other to produce or force the 'spiral' of transgression. 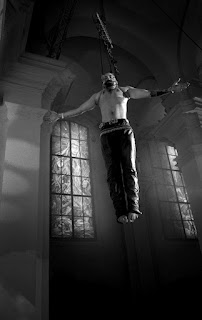 In particular Tess's account of Bibi, and her scepticism, offer a questioning (quite literally) of this 'dynamic':

Do you modify to improve, or empower, or simply to feed the greedy black scorn of the human boundaries that succor flesh to blood to the pulse and contraction of the emperor mind within?

In a key formulation Tess remarks of Bibi 'her body was the vanguard'. This captures, I'd argue, a contention we can derive from Badiou that the collective 'passion for the real' of the avant-gardes has become saturated. This does not mean it is simply exhausted, but rather dispersed into the body itself - hence Badiou's scepticism concerning 'postmodern' art as the art of bodies/languages in their implosive and inert 'presence'.

The novel, however, seems to terminate all options - public performance, collectivity, individual involution - in a final pairing of death, inert madness, and inertial passivity. The novel explicitly formulates the problem of change as its core - transformation, transfiguration, becoming, all seemed to twist finally into forms of failure. While this can be seen as a 'local' pathology, either of this 'scene' or the characters in the narrative, the book also points to the winding down of the 'dynamic' of transgression. Of course, the novel itself is the 'creative' allegory of these 'failures', and it is fitting that it is not entirely successful - or perhaps successful in its own strangely drawn-out inertia. We might say it is the prefigurative novel of 'democratic materialism' and its pathologies, the indicator of the impasse of Bergsonian 'mechanical' vitalism as 'creative'; in this way, it is the dead-end of transgression.
Posted by Benjamin at 03:40

I can lend you my copy if you wish

It's been a while since I've read the novel -- but yes, I agree that it points to the dead end of the discourse & practice of "transgression" as liberation...

just catching up pending yr paper for us - Cipher (£27...) due to arrive, but will obviously resist comment! I quite liked both, but a bit too much on the art side for me really

I also wanted to mention -- Koja's 1990s horror novels are a bit hard to come by (she has written quite different sorts of books more recently), but she has told me that she plans to put out electronic versions of them (hence, cheaper and more accessible), hopefully soon.