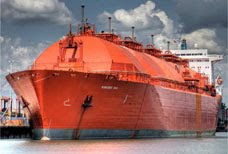 Evan excellent on salvagepunk (although I must say I dislike the use of 'punk' generally, largely because I never found punk that good; although salvagepost-punk might be considered a little arch...).
I'm not sure I fully believe in the irrevocable apocalyptic structure, or the concept of late capitalism (late for what?) to repeat the famous quip, but salvagepunk as 'traversal' (to use the term I'm trying out in the conclusion to my book) sounds like what I am also struggling with in terms of the negative, although in Evan better materialised than my rather abstract 'musings'.
I'd be interested in more on the relation to modernism as historical past as well. I think the tarrying of modernism with salvage would also characterise those more dubious (politically) projects; after all Pound's 1912 essay has the title 'I gather the limbs of Osiris'...
Anyway, no doubt to be discussed at HM.
A strange connection appears between Evan's work and Owen's on Southampton: the tanker the 'Margaret Hill' has been impounded by the Environment Agency at Southampton to prevent its illegal dismantling...
Posted by Benjamin at 02:02

Full disclosure: the word "punk" really rubs me the wrong way as well, particularly given the total hollowness of what punk looks like now. As for the actual musical or historical standing of what punk as a genre/form was, that's a different issue, one that I mostly feel too young to properly speak of (it was already third wave, or however one wants to designate it, by the time I got around to it). My punkish attachments, musically, lie closest with late 70's LA punk.

My usage of the word is largely incidental (just coming off of cyberpunk and steampunk, putting my thinking in relation to that). That, and the fact that it is a good deal snappier than saying "dialectical occupation of internal contradictions to the point of collapse, accompanied by the necrothought of the montage artist's task, all shot through with a mordant glint of the laughing eye" each time.

Word verification: "betrist". A lovely compound misspelling and cross-language injunction to be a sad creature.

I am just too old for punk, and even missed post-punk to inhabit the depressed world of the 80s (arrrggghhh) w/o much musical sense until the encounter with Detroit techno / hip-hop.
I agree there aren't any real alternatives, but I think you should promote the full description at every opportunity. It would make a great 'less than 50 words' summary than publishers seem to love so much

I think I'll pad my book length with a bit of definition insertion at every moment I get. More seriously, I think I might have a glossary in the book, or at least something resembling it in the introduction.

And I was too young and/or unaware for that encounter with Detroit techno that seems to have sonically marked so many Brits (though I don't know the degree to which you were). It really seems like a foundational experience for the aesthetics/tastes, etc, of what I think of as your extended circle (HM, k-punk, etc). Is that the case?

Pretty much for me, altho I can't speak entirely for the others. For me it was Derrick May's It is What It is on the (seminal) Virgin techno comp:
http://www.discogs.com/release/65112

Of course I never went to clubs / raves / experienced the 'second summer of love / 1989' due to weedy academic nature...

It was the sound of anti-humanist technics for me though. Punk came later, and I never found the first wave convincing at all: too rock.

ps I like a good glossary - I recommend in the style of Flaubert's dictionary of received ideas http://www.robotwisdom.com/flaubert/bouvard/idees.html

That is a glossary to end all. Or at least it gives Ambrose Bierce a run for his money.