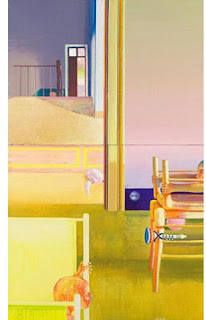 In his text on Kafka's Odradek Slavoj Žižek states that: ‘Reading Kafka demands a great effort of abstraction – an effort, not of learning more (the proper interpretive horizon to understand his works), but of unlearning the stand interpretive references, so that one becomes able to open up to the raw force of Kafka’s writing.’ (136)


What interests me is that it requires a greater effort of abstraction to unlearn the abstract framings that already surround and penetrate Kafka's text, so that one can then approach that text as concrete. It strikes me that this is one way in which to understand a procedure for grasping the 'real abstractions' of capitalism: the abstraction of labour under real subsumption and the abstracting effects of the commodity-form (of course these can be linked together under the aegis of the commodity-form, as labour itself is the commodity). Rather than a humanist or anthropological short-cut to the concrete (something like the risk partially run in The German Ideology), we have the passage through abstraction as a procedure.


In a rather unlikely pairing we can link this to Badiou's operations of subtraction (although it is striking that Badiou nowhere substantially thinks the commodity-form) and the Hegelian procedure as parsed by Fredric Jameson: ‘stupid stereotype, or the “appearance”; ingenious correction, the underlying reality or “essence”; finally, after all, the return to the reality of the appearance, so that it was the appearance that was “true” after all.’
Perhaps we could minimally justify this pairing by noting that the capitalist real abstraction takes the form of the Hegelian subject - positing its presuppositions. In this way Badiou's anti-Hegelian procedure of subtraction would gain purchase, although when applied to these real abstractions. In a more tricksy fashion perhaps Hegel's own procedure offers a pharmakon, a passage back through the process of real abstraction that can impose further abstraction upon it. The irony of real abstraction is, of course, that it is 'lived' as 'concrete' - if in the mode of a spiritualisation of everyday life. To gain purchase on this requires a 'greater effort of abstraction'.
References
Jameson, Fredric, ‘First Impressions’, London Review of Books 28.17 (7 September 2006)
Žižek, Slavoj, ‘Odradek as a Political Category’, Lacanian Ink 24/25 (2005): 136-155
Posted by Benjamin at 01:30