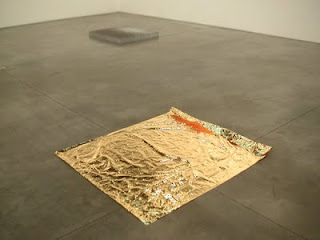 I think you've neglected much of Witt and Crompton's attack on the idea of the artists' complete dependence and related complicity with the financial crisis to produce art (as in their comments on the Tate and BP). And in passing over their argument about how art must not be entirely beholden to its situation, I worry that you've arrived at much the same argument as is made by those in favor of austerity measures - "We're all responsible for this economic calamity, so share in the burden."

I was merely picking up on this line and the Badiouian affirmative tone, but apologies if it seems a mischaracterisation and certainly not implying 'we are all responsible' I hope.

I do find their particular take on Badiou's artistic subject pretty vacuous and their closing example unconvincing, so I am all with you on that!

cool, I'm afraid proper reading seems to be disappearing for me between trying to do various events and the banal horrors of work, so I'm not on top form (if I ever was...)