Your choice is either some unspecified polar ice-cap meltdown: 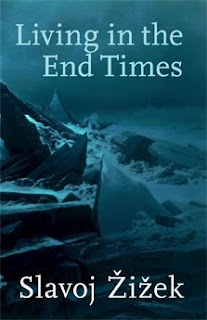 After having suffered the misery of 2012 on DVD; the world has to be 'cleansed' of over 5 billion people so some miserable hack pretentious writer who sold less than 500 copies of his palpably awful book can get back with his wife and family, after neatly dispatching the rather kind and useful stepfather (but he was a plastic surgeon...), I could do without any more apocalypse for a while. Perhaps though, after Alberto's suggestion, we should have a panel on apocalypse delayed at HM this year.
Posted by Benjamin at 08:12

Durer's 1525 Dream Vision, as featured in Time of the Wolf, would have been far superior:

Passages to Apocalypse, Lineages of Apocalypse....

In Defense of Lost Apocalypse...

Looks like I need to hustle Combined and Uneven Apocalypse to press so Slavoj and I can go a combined unholy book tour.

Apocalypse is so... jejune. These days it is, anyway.

Out of curiosity, do you suppose we have anything in common?

Severely off-topic, but I was wondering if you’d be interested in a project I’m aiming at a number of the blog authors in the continental philosophy blogosphere. Specifically, I’m interested in developing a mailing list that would act as a “back channel” for discussion across a range of minds, the virtue of which is on-going, long-form discussion that bridges the gap between blog comments sections and email. If this interests you, let me know at what[dot]is[dot]ground[at]gmail[dot]com.