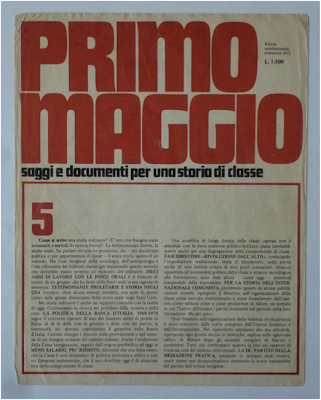 'even in the daily cash receipts of the trade unions there is more resistance than any targeted aggression.'
Here Mario Tronti makes his comments on the G20 protests, comparing the protests in London and Rome. While Tronti accepts the politics of the symbolic gesture, he is also concerned about the imprecision of targeting the banks, and not collective capital. While I tend to think this sort of claim is often overstated, and after all it is part of materialising the 'immaterial'/real abstractions of capital, what is more interesting are Tronti's thoughts on labour. He argues: 'it is important to bring the force of labour back into the game, in order to make it visible and to show that it is not demobilised.' Again, not unsurprisingly for Tronti, the emphasis falls on the necessity for leadership and political direction, and the need to shift labour into 'a more offensive expression' and to identify the 'real opponent'. In line with his previous comments Tronti insists on the necessity for a re-analysis of labour as a political subject and as a social presence. The emphasis needs to fall on the crisis as a crisis of labour, and the need to find a new organisational form for the diffusion of contemporary labour: 'Labour is a decisive point.'
I'd tend to agree with that, but I wonder about the switch away from the G20 protests in Rome vectored through the CGIL and the lack of comment on the London protests in terms of an organisational vector? While I'm not necessarily inclined to see the latter as a sign of strength it seems to me something (again) goes missing in terms of how the organisational and the political are to be provided. As I note above I think the supposed naivete of the protests tends to be over-stated, which is self-serving in relation to the lack of any organisational or political articulation elsewhere.
Posted by Benjamin at 03:32